This week our Meet the Brewer comes from hand’s on brewer at the fantastic Marble Brewery, Dominic Driscoll, whom I recently met on Twissup, he is a serious beer nut, great drinking buddy, dunlop purofort aficionado, brewer of fine ales, builder of awesome 8 feet tall snowmen and has a twisted sense of humour.

What is your brewing capacity?
The old brewery is 4.5bbl and the new one is 12bbl. We generally knock out about 150 firkins and 30×12 bottles a week. 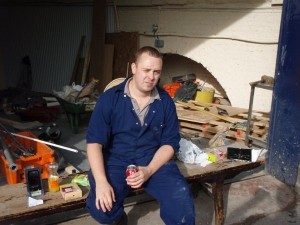 Dom takes a break from brewing

The Marble is a 2 brewery business at the moment; I don’t know how long this will last though, maybe until we get a couple more fermenters! We don’t use finings and are thus registered with the Vegetarian Society. We’re also Soil Association-registered, because we make both organic and non-organic beers. nI suppose the biggest difference is our commitment to using quality ingredients and sourcing the best hops we can from around the world, and using plenty of them!

How long have you been brewing for?
4 and a bit years.

How did you get into brewing?
After University, I basically messed about for a few years, running a city centre bar. I then decided to join the army, but they wouldn’t let me in. The only other thing I loved more than shooting people was good beer, so I knuckled down, did a lot of reading, got some experience and eventually joined the Marble team (I don’t really love shooting people; I nearly joined the Royal Engineers).

What special/seasonal beers do you do?
Apart from a number of seasonals, we’ve recently bottled our 10 month old Barley Wine, Special 2009 and Decadence Imperial Stout, as well as our just-released raspberry and sour cherry aged versions, all cork and cage finished in 75cl bottles. Available from literally some good beer shops and the Marble Arch and Marble Beer House.

Where do you think the future of brewing lies?
Hopefully in beers that are produced with quality ingredients, by brewers who aren’t afraid to try new things, and do things a little differently. As the old guard from the recent microbreweries boom retire, e.g. those of the firkin company-kit era, I can see young brewers will be a bit more adventurous and hopefully produce some great beer in years to come.

What is your proudest moment in brewing?
I don’t pay much attention to the awards we get…brewers are artists and shouldn’t be pitted against each other like dogs. God damn it I love winning though and getting all that lovely attention. Colin reckons I’m most proud of our Barley wine but I think my proudest moment was when I put my first brew through unaided, many moons ago. That was a great feeling. 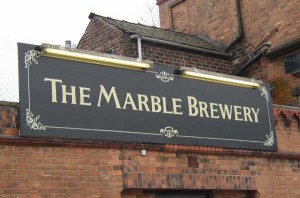 Holly Daze from Fyne Ales in Scotland, a wonderful combination of malty goodness and floral hop. Fyne Ales are awesome, I always enjoy their beer.

What is your favourite hop?
Hops change a lot year on year. Retrospectively it has to be the NZ B-Saaz 2006 (now Motueka), which were out of this world. At the moment, probably Simcoe.

What is your brewing ambition?
We’re having a great time here at the Marble, with the new kit providing a lot of challenges but also plenty of inspiration. Our ambition this year is to produce lots more cask beer than ever before and get it to new places. We always run out about halfway across the M62!

Do you have a brewing hero/inspiration?
Menno Olivier at De Molen is a massive hero of mine. He makes some amazing beer. Every brewer should be forced to go to Bodegraven, where the brewery/restaurant is. This is going to sound really lame, but my main inspiration comes from the other Marble boys, head brewer James and fellow comrade Colin. We like to taste all our brews every week, bounce ideas off each other, call each other names and come up with some beer ideas that hopefully other people like too.

Which beer do you wish you had brewed?
Dogma by Brewdog. I love it. I’m very annoyed it’s not in Sainsbury’s any more.

Favourite hobby outside of brewing?
When I get chance, I like to travel and I love good food and drink. I’m a big fan of good Sherry, especially Manzanilla. I do a lot of cooking. Well actually, I don’t, my girlfriend does. I do a lot of washing up.

Anything else?
For those who haven’t been, and even those that have, come to the Marble Arch. It’s an amazing 120-something year old public house, with tiled interior, a great ‘shop window’ for our brewery, amazing food, and if we’re about, which we usually are, we’ll show you round.

I would send you to the Marble website but it’s not up and running yet, so check them out on facebook here.