Posted on January 7, 2010 by andyMogg in Adnams, Breweries & Pubs, Meet The Brewer 7 Comments

Next up in our meet the brewer feature is Fergus Fitzgerald from Adnams, For those of you who haven’t heard of  Adnams, they are based in Southwold and do a cracking range of beers, they also run a selection of hotels and even do wine – yes wine! So over to Fergus for more about himself and their ale.. 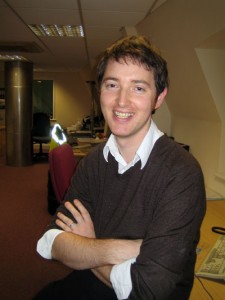 Fergus smiles for the camera

What is your brewery capacity?
Our Annual capacity is about 140,000 brls

What is different about your brewery?
Adnams is a mix of the traditional and the modern. We specialise in cask beer, which is seen as a very traditional product but we have modernised the brewing over the past decade and we now have the equipment, and I think the desire, to expand our brewing horizons. We are becoming more experimental in what we do but still keeping our history and tradition at the core. Brewing on the East Coast of England with a view of the Lighthouse and the Sea from your window gives you a certain perspective on your place in the world and so we try to make sure we are a positive influence on our neighbours and the wider community.

How did you get into brewing?
I studied Biotechnology and my first job was in a Dairy testing cheese that had been stored at 25oC for a month. I decided fairly quickly that was not for me. In 1995 I got a temporary job at Fullers in the lab when I was 19 and I decided brewing was what I wanted to do. I loved the mix of the creativity and science of brewing. I spent 6 months there before returning to Ireland where I worked at Murphy in Cork for a short while before returning in 1997 to Fullers. I spent 7 more years at Fullers and while I was there I studied for the brewing exams. I worked in most areas of the brewery before finishing up in the brewhouse. Then in 2004 I moved to Adnams as assistant brewer. In 2008 I finished off my Master brewer exams and I took over when our previous Head brewer retired early last year.

What beers do you brew regularly?
Our regular cask beers are Bitter,Broadside and Explorer. While in bottle we do Bitter, Broadside, Explorer,East Green, Lighthouse, Gunhill and now Innovation as well. (Note: Glad to hear Innovation is now regular – it’s truly is an awesome beer)

What special/seasonal beers do you brew?
We brew an ever increasing list of seasonal beers. In addition to bringing  Lighthouse and Gunhill out as seasonal cask beers we will be brewing for cask: Oyster stout in Feb, Extra in April and May, Mayday in May, Regatta for the summer months, possibly a Halloween beer, then Old ale for Oct,Nov and Dec and Tally Ho for December, although we will brew that in July and age it until we release in December. We will bottle Tally Ho again next year (but a bit earlier than this year).

We will also bottle a few one off brews next year but I can’t talk about them yet. We are also doing a series of one off cask beers which are our interpretation of different beer styles in cask. We have brewed a Kolsch style, a Belgian abbey style and now a German Wheat. In January we are doing and American IPA, in Feb a Belgian Wheat beer and in March, well of course an Irish dry stout. (Note This was written at the end of 2009 so next year is actually this year – confused – yeah me too ;o) )

Where do you think the future of brewing lies?
Hopefully with a wider appreciation for the breath of flavours in beer. I think all brewers will need to be more inventive. I also think brewers need to be more forthright in defence of beer against the anti-alcohol lobby.

What is your proudest moment in brewing?
I have a proud moment everytime someone who says they don’t like beer tries Innovation. At the moment I’m particularly proud of our German Wheat beer and I’m always proud of the way everyone at Adnams puts their heart and soul into what we do.

What was last beer you drank?
Had a taste of our version of a German style wheat beer in cask with Mark Dorber a few hours ago plus a little trial we have in FV43.

What is your favourite hop?
Currently it’s Nelson Sauvign but I’m trying to get hold of some of this years Bramling Cross that I smelled a few months ago, which was fantastic, and a new hop from America called Citra.

What is your brewing ambition?
I love brewing beers that people want to drink and I think my ambition as a brewer is just to do that.

Do you have a Brewing hero/inspiration?
I’ve worked under 3 head brewers, Reg Drury and John Keeling at Fullers and Mike Powell Evans at Adnams and learnt something from all of them and I learn something from almost every brewer that I meet. I met a Danish brewer called Per KÃ¸lster during the summer and I loved his approach to beer, he was growing malting everything himself and growing his own hops, all his beers are unfiltered and unpasteurised. He was letting his ingredients lead the way to the beer he would create. It was as uncomplicated and as true a reflection of what brewing should be about as I have seen.

Which beer do you wish you had brewed?
Oh loads of beers, the last one I tried that I loved was Nils Oscars’ Rokporter

What is your Favourite hobby outside of brewing.
I have a 3 year old son so my main hobby is going to the transport museum and riding around in seemingly endless circles on the old trams. I have a few Bonsai trees that I like to look after when I can.

And there you go – you now hopefully know something about Adnams and Fergus that you didn’t know before. Many thanks to Fergus for taking the time out to complete the questionnaire.

If you would like to find out more about Adnams then check out their website, blog and master brewer blog and follow them on twitter. If you see their beers give them a try, they very kindly sent me some Innovation in 2009 and it really did blow me away, everyone I have given a bottle to has agreed just how tasty it is.

They were also one of the breweries to take part in Beer Swap and did some rather cool videos which you can watch here.

Oh you can also read more about the Adnams beers I’ve had so far here. more coming as soon as i’ve typed them up.