Posted on August 24, 2011 by andyMogg in Maui Brewing Co, Meet The Brewer 3 Comments

What is your Brewery name and where did it come from?
Maui Brewing Co., when we set out at creating a truly local craft beer for our island we chose to keep it simple and use something that clearly spoke about who and where we are. Maui is a well-known travel destination and we wanted to bring light to the fact that our company would brew all our products on Maui.

What is your brewery capacity?
Everything, but I’d like to point out that my brewing team deserves the titles they hold. As much as I may have brewed and can brew, they deserve the credit. I’m the founder and have become more of chief idea guy and manage the direction and growth of our company. I turn quite a few wrenches though. 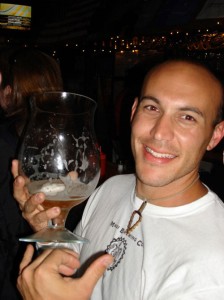 What is different about your brewery?
Different from??? I think the obvious is the main difference between ourselves and our brethren in Craft Brewing is our location and the struggle it is to brew on an island. Our friends at Alaskan certainly can relate. We are just so isolated from our supplies, parts, technicians, etc that it presents a challenge. Fortunately we like a good challenge and believe that the struggle is worth our integrity in always being truly local and brewing our beer in Hawaii.

How long have you been brewing for?
Almost 7 years now, we started in 2005 as a small Brewpub, we did about 400 bbls that year. In 2007 our production facility opened and we began brewing and canning as well. That year we did around 1500 bbls. We still brew at both locations, this year well do over 18000 bbls. It’s been a crazy ride that we (our entire team has enjoyed.

How did you get into brewing?
I always loved good beer and for the most part stayed away from the fizzy yellow domestics, of course there were those days in college when you really had no choice but in large part I was a craft and import guy. In 2001 I took a vacation to Maui and fell in love with the island, I also learned that craft beer was virtually non existent in Hawaii. In fact most were made on the mainland and shipped back. I saw an opportunity to create world class beers and maintain authenticity and integrity of the brand by truly brewing in Hawaii. We created our motto in early 2005 just after starting the company “Handcrafted Ales & Lagers Brewed with Aloha”

What beers do you brew regularly?
Our flagship brands are the Bikini Blonde Lager, Big Swell IPA, and CoCoNut PorTeR. These were the first 3 in cans, then we added Mana Wheat to the lineup of canned beers. Going back to 2005 before canning we brewed around 20 different beers in a year, now with seasonals (and a lot more tanks) we brew around 50 different beers in a year, most of which are available at the pub only or select draft accounts that move good volume for us.

What special/seasonal beers do you brew?
As I mentioned about 50 different beers a year, we brew so many to keep the variety and education behind our craft forging ahead. In Hawaii the selection isn’t anywhere near the mainland so we like to mix it up.

Where do you think the future of brewing lies?
No one can say for sure but I’d like to think that we will always be pursuing better beer and educating those that are in the dark about what craft beer is and what it can be. Technology will improve, costs will go up, all the usual you see in successful industries but the ultimate success will always lie in the quality and authenticity of the liquid. 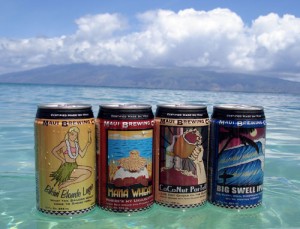 Do you bottle/keg/cask your beer?
No bottles, we can! yes to all the rest.

What is you proudest moment in brewing?
Getting the doors open. since then I’d say every day gives me that feeling when I see the enjoyment of our beers by our fans new and old.

Do you have any brewing regrets?
None, we wouldn’t be where we are without any “mistakes” that may have occurred. Easy to look back and think you should’ve done something different but I know at the times we didn’t have a choice and were just struggling to succeed. So no regrets.

What is your brewing ambition?
Maintain our growth and success while continuing to be who we say we are. Our integrity means more than a paycheck, we’ll always be truly local as long as I’m at the helm! Beyond that continuing to wow the audience, innovate, collaborate, and deliver great beer to a thirsty world.

What was last beer you drank?
I visited my good friends at Allagash yesterday so Allagash White and Confluence ’11

What is your favourite hop and why?
The one that doesn’t get dropped on the floor when weighing out.

What is your favourite beer/food combo?
I LOVE food so it’s hard to play favorites, today I’d say a nice lambic or gueuze with duck confit, or maybe a spicy jambalaya with a big hoppy ipa, or…. 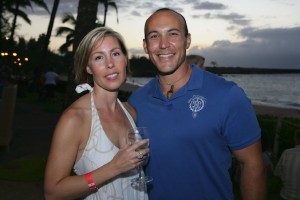 Do you have a Brewing hero/inspiration?
Too many to list, Sam, Dale, Adam, Greg, Bagby, I could fill this page. Might sound a bit cliche but we all stick together and help each other out in this business….well 99% do. I’ve called a lot of guys that have crossed bridges I needed to cross to get advice and perspective. We can all learn from each other.

If you could brew one collaboration beer with someone who would it be with and what would it be?
We’ve enjoyed a couple collaborations already. I’m down to collaborate with any good brewed out there. I’m fortunate to call among my friends some notable craft brewers and you’ll see some fun ones in the coming years.

Which beer do you wish you had brewed?
All the ones I haven’t yet, we’ll get around to them. One we did recently was Maui Onion Mild to celebrate the wonderful Maui Onion. I don’t believe onion had ever been used in beer before, but it was delicious.

How do you spend your time when you aren’t brewing?
Paddle boarding with my wife and our kids (Sofie, our black lab sharpei mix that is part fish I think, and Bella our blue nose pit), relaxing, reading industry stuff. To be honest it’s hard for me to shut off and even when I’m chilling I’m still developing ideas and problem solving. You never know when or where an idea will strike.

If you could have one superhero superpower what would it be?
Flight, I recently started flying and really enjoy the freedom, plus I don’t enjoy the airport hassles much.

Thanks to Garrett for taking time to fill this in, please visit his website at  www.MauiBrewingCo.com , follow him on twitter here or buy their beers from MBT here.