Posted on June 10, 2014 by andyMogg in Hopcraft - Pixie Spring Brewing, Meet The Brewer No Comments

Hopcraft / Pixie Spring, it was bought as scrap from Iceni in Norfolk; it was in a terrible state and it took us 6 months to get it running again.

What is your brewery capacity?
Not easy to answer! the copper is 35 barrels, we have 2 12 barrel fermenters and two tens! At present we brew (usually) 8 barrel (1400 litre) batches twice a week although we do some 12 barrel (2100 litre) runs for popular beers occasionally. We have 40 barrels (6500 litres) of fermentation capacity and 48 barrels (8000 litres) of conditioning space.

What is different about your brewery?
I’d like to think our commitment to hops and above all their best useage; we dry hop almost every beer and condition it for a week on the hop pellets which I think gives the best aroma possible.

How long have you been brewing for?
I also brew with Steel City in Sheffield which began in 2009, although Hopcraft only started in June 2013.

How did you get into brewing?
I’ve always lived and breathed beer, always wanted to be a brewer! I have done full- mash homebrew as a student, but the “serious” side of it came about when we started Steel City.

What beers do you brew regularly?
We only have one permanent beer, Tidy bitter. We concentrate on one-off experimental beers although we repeat (with recipe modifications to make them better) the more popular ones. I’d get very bored brewing the same beer all the time.

What special/seasonal beers do you brew?
Almost every brew is special! In the “different” way…

Where do you think the future of brewing lies?
Being different, concentrating on quality, giving drinkers what they want (as long as it’s a beer we like to brew!)

Do you bottle/keg/cask your beer?
We cask and keg, shortly bottling too

What is you proudest moment in brewing?
Don’t really have one, although our first brew at Hopcraft going down so well and getting such good feedback was very rewarding. I’m not a vain person and don’t need constant reassurance about my beer – if I don’t like it it doesn’t go out, that’s the way I work.

Do you have any brewing regrets?
Not starting sooner.

What is your brewing ambition?
To keep improving my knowledge and our beers, to earn enough to pay someone to dig out the mashtun so I can rest my old bones with a cup of tea.

What was last beer you drank?
I had a sample of our “Diggin’ up the King” American/Belgian brown ale from the conditioning tank half an hour ago. Just to make sure it’s alright.

What is your favourite hop and why?
Difficult… hops vary year on year, and this year Nelson Sauvin is absolutely amazing; it oozes tropical fruit. I love Sorachi Ace for it’s coconut and dill flavours which go so well in a porter, I’m a massive fan of Citra as it’s so versatile and tasty, I’ve recently renewed my love with Columbus too… I could never pick a favourite!

What is your favourite beer/food combo?
Curry and IPA, or cheese and hoppy pale beers.

Do you have a Brewing hero/inspiration?
Oh yes! Brendan Dobbin and Sean Franklin opened my eyes to hops in 1990 and I think helped change the UK beer scene from boring brown beer to the vibrant one we have now.

If you could brew one collaboration beer with someone who would it be with and what would it be?
“Saint Brendan” with Brendan Dobbin… this has been talked about but I doubt it’ll happen, unfortunately.

If you could share a pint with someone dead or alive who would it be, what would be the beer and where would you have it?
The Mesopotamian who discovered beer, when he discovered it, and I’d like to be drinking it!

Which beer do you wish you had brewed?
Sharps Doom Bar. Not for the beer, I hate it, but I could be minted now and sat on my yacht drinking vintage gueuze off a model’s tits.

How do you spend your time when you aren’t brewing?
Thinking about beer, travelling to drink beer, listening to punk/goth/ska/metal music, making up beer recipes, looking after Minsk my cat.

If you could have one superhero superpower what would it be?
The touch of my right index finger would bestow my choice of hop upon a pint of beer. That and to cure disease etc.

All are linked from here

Anything else you want to tell us?
hops are good for you, make sure you have your 5 a day. 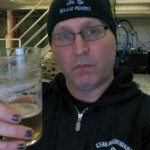 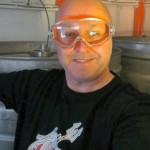 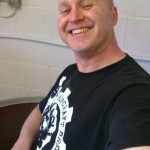 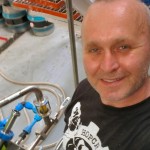 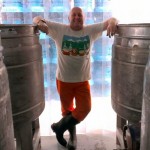 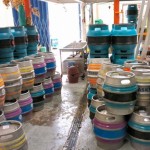 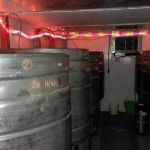