Posted on March 3, 2011 by andyMogg in Lymestone, Meet The Brewer No Comments

This week’s Meet the Brewer comes from Ian Bradford, or Brad as he’s know from Lymestone Brewery in Staffordshire.

What is your Brewery name and where did it come from?
Lymestone Brewery:- an amalgamation of the names of the towns of Newcastle under Lyme and Stone, both in Staffordshire

What is your brewery capacity?
6 x10 Barrels 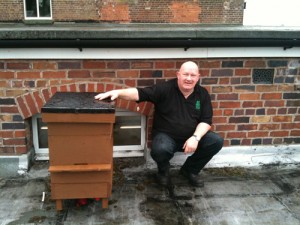 Brad and his bees

What is different about your brewery?
Family-run microbrewery singlehandedly upholding the long established tradition of brewing great beer in the town of Stone

How long have you been brewing for?
Two and a half years here, 12 years at the Titanic Brewery

How did you get into brewing?
I played front row rugby with SIBA Chairman Keith Bott at Eccleshall RUFC. He gave me my introduction to the brewing industry.

Where do you think the future of brewing lies?
With small â€œcraftâ€ brewers who are passionate about life, beer and community.

Do you bottle/keg/cask your beer?
Cask and bottle (outsourced to Holden’s Brewery)

What is you proudest moment in brewing?
Tasting my first Lymestone beer

Do you have any brewing regrets?
Nothing I can’t handle

What is your brewing ambition?
To hand a solvent microbrewery on to the next generation

What was last beer you drank?
Gaul Stone

What is your favourite hop and why?
Boadicea:- an English hedgerow hop that has loads of flavour and aroma

What is your favourite beer/food combo?
Hoppy beer / spicey food

Do you have a Brewing hero/inspiration?
Many:- any small independent brewer

If you could brew one collaboration beer with someone who would it be with and what would it be?
Andy Wilson from the White Horse Brewery, we’d spend all day laughing at each other and brew a hoppy 4.0%

Is there a beer you wish you had brewed?
Watch this space

How do you spend your time when you aren’t brewing?
I volunteer in Scouting Leadership. We take 6 year olds and help them become 18 year olds with D of E qualifications. It’s very rewarding and great fun.

If you could have one superhero superpower what would it be?
I’d never need sleep

Anything else you want to tell us?
In 2010 we established 3 colonies of bees on the brewery roof. The honey produced was used to brew Stone Brood, a 4.4% chocolate honey beer which will also be available in bottle late 2011