Posted on April 7, 2011 by andyMogg in Buxton Brewery, Meet The Brewer 4 Comments

What is your brewery capacity?
5 Barrel with a half barrel pilot plant for crazy stuff.

What is different about your brewery?
Good question, there are so many small breweries around and dare i say it some pretty average beers…I guess we’re different because we never stop trying to improve our beers. There is no compromise on quality, flavour and aroma and that’s certainly what drives me, i don’t like boring brown beers with little flavour and aroma so why should i brew them!? 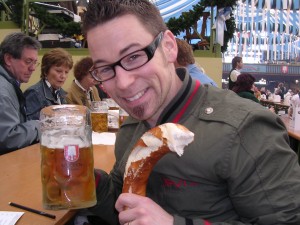 Over sized beer and food anyone?

How long have you been brewing for?
Coming up 21 years now and i’m only 35!

How did you get into brewing?
I started brewing at the tender age of 14, basically my dad got me to homebrew for him, a good deal for him, i brewed it and he drunk it!

What special/seasonal beers do you brew? Axe Edge, Gold, and now two new
ones, English Pale Ale with lashings of good English hops (not fuggles or
goldings)and a Black IPA

Where do you think the future of brewing lies?
I hope it lies in a more open attitude to experimentation and a greater range of beers and the acknowledgement of them. I think the consumer wants this but there seems to be an attitude of conformity to certain brewing styles however dead or unpopular they are.

Do you bottle/keg/cask your beer?
We bottle and cask at the moment, looking into kegging soon!

What is you proudest moment in brewing?
I’ve got a couple actually, 2008 NZ national homebrew champion and Recently winning best strong ale at the Bradford beer festival with Axe Edge

Do you have any brewing regrets?
Why oh why did i leave all my homebrew kit in NZ!?

What is your favourite hop and why?
Simcoe, i just have a thing for hops that have that cat wee thing going on.

What is your favourite beer/food combo?
I like the flavours and aromas that good beer showcases, I don’t feel the need to cloud them with food.

Do you have a Brewing hero/inspiration?
I like the uncompromising attitude that Brewdog have

If you could brew one collaboration beer with someone who would it be with and what would it be?
I’d love to do a collaboration with Twisted Hop in Christchurch NZ…probably a black IPA to commemorate the black day when the earthquake hit recently

Which beer do you wish you had brewed?
How do you spend your time when you aren’t brewing? I like to thrash out a bit of Iron Maiden on my guitar

If you could have one superhero superpower what would it be?
Teleportation, holy crap i’d go to some cool pubs all around the world!

Thanks to TK for taking time out to fill this in, you can return the favour by following @kempicus on twitter, or following @buxtonbrewery or maybe even take a look at their website.