Posted on February 25, 2010 by andyMogg in BrewDog, Breweries & Pubs, Meet The Brewer 4 Comments

This week’s Meet The Brewer, comes from north of the border where James Watt from BrewDog has kindly taken time out from his world domination plans and fishing to complete our little feature.

Like many of the things BrewDog do this is likely to divide opinion so if you have any thoughts please leave them in the comments section a the bottom. 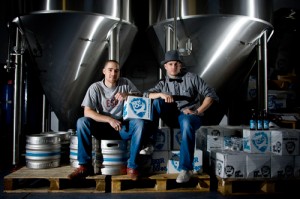 James and Martin from Brewdog

What is different about your brewery?
Our FD is a Chocolate Labrador and our night shift is made up largely of penguins.

We are dedicated to making contemporary and progressive beers showcasing some of the world’s classic beer styles. All with an innovative twist and customary BrewDog bite.

How long have you been brewing for?
2 and a half years as BrewDog, 5 years overall. Martin and I homebrewed together before BrewDog.

How did you get into brewing?
We could not find any beers we wanted to drink in the UK and decided the best thing to do was start brewing our own. Most UK small breweries are ever so boring, we wanted to do something relevant and edgy and introduce craft beer to a whole new audience in the UK.

Both only 24 at the time, we leased a building, got some scary bank loans, spent all our money on stainless steel and started making some hardcore beers. 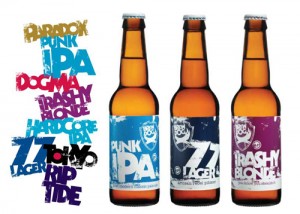 Consumers are going to wake up to the lies of the faceless corporate multi-national monstrosities and the bland liquid cardboard they industrially spit out.

People have been brain-washed by vindictive lies perpetrated with the veracity of pseudo-propaganda. They can’t help but be sucked down the rabbit hole. 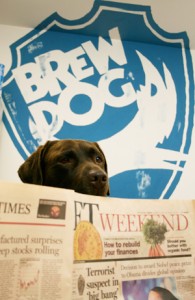 At BrewDog we are on a mission to open as many people’s eyes as possible.

What is you proudest moment in brewing?
A gold medal at the 2008 World Beer Cup was pretty damn cool.

Brewing 2 collaborations with Stone (our brewing idols) was awesome, just like playing music on stage with our favourite band!

Do you have any brewing regrets?
We don’t do regrets at BrewDog!

What was last beer you drank?
Three Floyds’ Lord Admiral Nelson. Stunning beer from one of my all time favourite breweries.

What is your favourite hop?
The current batch of centennial we have is superb. We love using loads and loads of hops atBrewDog.

The freeze hopping process used in Sink the Bismarck produced staggering results. We used Amarillo for that.

What is your brewing ambition?
We just want to make other people as passionate about great craft beer as we are. That is our goal, hopefully while having some fun along the way too.

Do you have a Brewing hero/inspiration?
Darth Vader, who I still thing will be the CEO of InBev.

Which beer do you wish you had brewed?
Alesmith Speedway Stout.

Favourite hobby outside of brewing?
Does sleeping count as a hobby?

Anything else you want to tell us?
Look our for loads of exciting things happening over the next 12 months including our first BrewDog pub in Aberdeen.