Posted on December 23, 2010 by andyMogg in Lovibonds, Meet The Brewer No Comments

What is your Brewery name and where did it come from?
Lovibonds Brewery. Lovibonds is quite a historic name in British brewing that unfortunately died a death in the late 60’s. We resurrected it in 2005.

What is your brewery capacity?
We do a lot of 750l (~5 UK barrel) batches and are moving into 2300l batches. We also still thrash a sweet little 100l overgrown home brew plant that I started the business with. 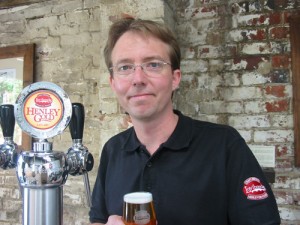 What is different about your brewery?
The only above brewplant that we own is the 100l pilot plant. We utilise spare capacity at a couple friendly local breweries, actually now running the entire brewing operation at one of those breweries. We are brewing on this equipment, not just handing over a recipe and having someone else brew for us.

How long have you been brewing for?
I started homebrewing in the States in 1996 after a friend introduced me to good beer and the art of making it at home. Charlie Papazian’s Complete Joy of Home Brewing was the book (and the beers I brewed from it) that really hooked me.

What beers do you brew regularly?
Our core range: Henley Gold, my take on a Weizen. Henley Amber, a session pale that punches above its weight in flavour. Henley Dark, a smoked porter. 69 IPA, a west coast IPA dry hopped with our Hopinator.

What special/seasonal beers do you brew?
We brew a Wheat Wine, which is an amped up version of our wheat beer. We also have a series of barrel aged beers. Our latest Dark Reserve No 2 is a bigger version of our Dark, this time aged in Jack Daniels barrels. We also have a sour beer barrel project underway in the cellar called Sour Grapes.

Where do you think the future of brewing lies?
Who knows. The UK beer market is pretty tough and it could go one of two ways. There are some really negative factors at the moment. We have the supermarkets selling beer for the cost of duty+VAT and the pub tie making it nearly impossible for a small brewer to sell his beer locally. On a positive note, there are a lot more breweries taking inspiration from other parts of the world and they aren’t too concerned about upsetting traditions. Because of this you will continue to see a lot more innovation here in the UK. 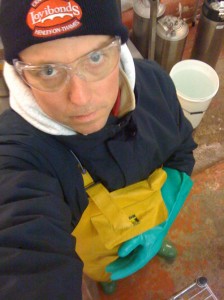 Jeff during a marathon bottling session in the cold

Do you bottle/keg/cask your beer?
We chose early on in the business to only keg our beer, for several reasons. We don’t do any filtration or any other voodoo trickery, all the clarity is achieved by gravity and it is basically ready to go when it gets put into the keg. The beer is â€˜real’, but not by a certain consumer group’s standards.

We also have our own small bottling line which is capable of filling 33cl and 75cl bottles.

What is you proudest moment in brewing?
Filled with loads of proud momentsâ€¦the best ones are when you serve someone a beer and they say that they think it is the best beer they have ever had. Those are the ones that get you up in the morning.

Do you have any brewing regrets?
There are a million variables in brewing and I’ll be the first to admit that over the years we’ve had some consistency issues. I guess what keeps me up at night the most is having to sell some of that beer that I wasn’t 100% happy with.

What is your brewing ambition?
I’m really just trying to have a successful second career doing something that I actually give a shit about.

What was last beer you drank?
Henley Amber from the kegerator in the shed.

What is your favourite hop?
Tough callâ€¦I do like the big American ones we are playing with, Columbus and Centennial in a dry hop rock my world. But then I also really love opening a bag of Hallertauer Hersbrucker, they are lovely and delicate and they are always very German and perfect in the bag.

Do you have a Brewing hero/inspiration?
Charlie Papazian is a big hero, he is largely responsible for craft beer in the US IMHO and I just love his relax, don’t worry attitude. I love beer books and a more recent hero would be Randy Mosher. His books are loaded with inspiration or beer stimulation. On more of a brewing side, I must say that I admire what Ken Grossman has done at Sierra Nevada. They are now a massive company but they really have stayed true to the craft.

How do you spend your time when you aren’t brewing?
Cleaning, kegging, bottling, cleaning, labeling, racking, breaking things, fixing things, chasing people for money and hiding from people chasing me for money.

Seriously, if I do get time off I like to spend it with my wife and two daughters. Sport wise, I recently got back into mountain biking. The Chilterns have some really nice tracks that I attack every Sunday. I really like skiing as well and usually manage a trip every year with the family.

If you could have one superhero superpower what would it be?
Invisibility, I’d love to sit in the bar when people are drinking our beer and get honest feedback.