Posted on September 22, 2011 by andyMogg in Meet The Brewer, William Worthington 2 Comments

What is your Brewery name and where did it come from?
William Worthington’s Brewery, Burton on Trent. Worthington’s started brewing in Burton in 1744.

What is different about your brewery?
It’s built in the National Brewery Centre. New vessesls, traditional design.

How long have you been brewing for?
I’ve been in the brewing industry for over 22 years.

How did you get into brewing?
Left university with Biological Sciences degree, joined Bass Brewers at Tadcaster in the laboratories. Trained as a brewer, passing Master Brewer exams in 2000. 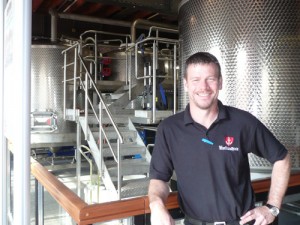 What special/seasonal beers do you brew?
Spring, Summer, Autumn and Winter Shields. All designed to reflect the changing seasons.

Where do you think the future of brewing lies?
There will always be a place for beers produced on a large scale and I respect that, but the trend towards more distinctive beers will continue as people look for more experience for their £’s.

Do you bottle/keg/cask your beer?
Cask and bottle

What is you proudest moment in brewing?
Historically passing my Masterbrewers exams. Most recently being appointed as replacement to Mr Wellington. Huge boots to fill, but what a challenge.

Do you have any brewing regrets?
None to date

What is your brewing ambition?
I would like to produce beers that are worthy of winning gold at the CAMRA GBBF, and that people will actively seek out

What was last beer you drank?
Bottle of Red Shield

What is your favourite hop and why?
I’m a big fan of the noble hop Saaz. People consider it to be a traditional lager hop, but I have dabbled in my garage with ales made using Saaz and they were very interesting. Lot’s of earthy, spicey characteristics, backed by orange peel and grapefuit notes.

What is your favourite beer/food combo?
Worthington’s White Shield and strong cheddar or dark chocolate. Both combinations work so well. Also any beer with pork scratchings – who doesn’t like this combination.

Do you have a Brewing hero/inspiration? I was always inspired by some of the beers I grew up with. Particularly Simpkiss and Bathams in the West Midlands. These were the some of the original blonde beers that I tasted and were (in the case of Simpkiss) and are (Bathams) fine beers.

Which beer do you wish you had brewed?
Always been a massive fan of Bathams from Brierley Hill, smooth and tasty. But then Guinness has always been a favourite on a Sunday as well, and is iconic.

How do you spend your time when you aren’t brewing?
I love to travel and have just started indoor climbing to keep fit. Also love to cook.

If you could have one superhero superpower what would it be?
Not sure it’s a super power, but like the idea of time travel to see what brewing was like in the old days and what the future holds.

BIG Thanks to Jim for taking part I know he’s super busy at the moment!!