Posted on July 29, 2010 by andyMogg in Breweries & Pubs, Fullers, Meet The Brewer 1 Comment

This week’s Meet the Brewer comes from a legend of the brewing world John Keeling from Fullers. I remember Fullers ESB being one of the first proper ales I drank, and to this day my Fullers ESB glass is still one of my favourite drinking vessels.

What is your brewery capacity?
Around 280,000 barrels per year

What is different about your brewery?
We are on an old historic brewing site in London. 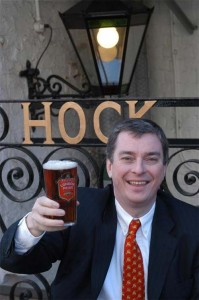 How long have you been brewing for?
36 years

How did you get into brewing?
My mother made me get a job when I left school luckily she choose the local brewery.

Where do you think the future of brewing lies?
I think that we have been moving towards greater choice with more premium beers and less commodity beers. I think that will continue with people willing to pay more for good beers and increasing ignoring bland beers (that is also true for other food products). People will be less influenced by standard marketing and advertising and more open to exploration and discovery. In short less factories more breweries

What is you proudest moment in brewing?
I have had a number of proud moments and Fullers have won many prizes. The one I enjoyed the most was when ESB won the best ESB at the World Beer Cup. I had to walk past Michael Jackson’s table to receive the award and he stood up, walked over to me and shook my hand. It was also a very proud moment when I was promoted to become Brewing Director of Fullers, it was also bizarre in that I could not tell anyone for 6 months! I also managed to get on the wrong bus home that night despite catching the same bus for 14 years!

What is your brewing ambition?
I want to explore time. For the last 50 years people have been reducing the time it takes to make a beer. I want to put that back.

What was last beer you drank?
I was in Scotland at the weekend and I found a bar with Thornbridge and Rudgate beers. I had an enjoyable afternoon.

Which beer do you wish you had brewed?
Boddington’s in the 70’s

Favourite hobby outside of brewing?
Listening to music,watching football and cricket

If you could have one superhero superpower what would it be?
The power to be in two places at once. One sat in a meeting the other making beer.

One comment on “Meet The Brewer: John Keeling (Fuller, Smith and Turner)”