Posted on February 28, 2012 by andyMogg in Meet The Brewer, Rough Draft 1 Comment

This week’s Meet The Brewer is from Jonathan at Rough Draft Brewing Co in North Yorkshire.

Along with filling this in Jonathan is also running a Meet the Brewer evening at The Station Hotel in Northallerton on 1 March 2012, from 7pm onwards.  There will four or five beers of his beers to try – some direct from the cask by gravity and some through the hand pull, Jonathan will be there to answer any questions on his beers and brewing process, so if you’re local get your self along.

What is your Brewery name and where did it come from?
The brewery is called the Rough Draft Brewing Company Limited – Rough Draft, for short. The idea for the name originated from looking at The Alaskan Brewing Company website way back in Autumn 2010. The brewery has a “rough draft” section in which they describe how their brewers design and make beers just for the sake of brewing. That description really appealed to me and with that appeal came the idea for the name of the brewer. I have noticed that a company in San Diego has also used the name for their brewery/bar…it ought not to be too much of a worry. Let’s be honest, I don’t envisage selling much beer on West Coast America…I feel sure they won’t be trying to sell beer on mainland Britain. Perhaps we can arrange some beer swaps for Beer Festivals in our respective home towns? Actually, I would really like to do that. 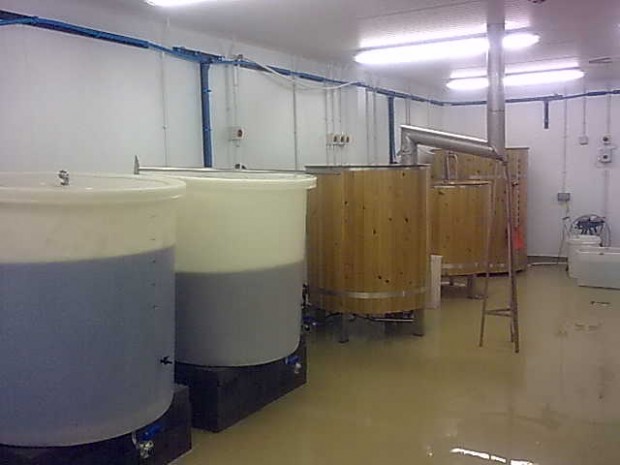 What is your brewery capacity?
I have an eight bbl hot liquor tank, a six bbl mash tun and copper and two five and half bbl fermenting vessels. I am sure if you average that out it comes to something meaningful. I tend to brew 3-4bbl batches at a time for the minute. The brewery kit came from Dave Porter over in Bury. Overall, it is good, well-made equipment.

What is different about your brewery?
Physically: I have a chimney flue placed in the middle of the brew floor. It looks really daft. It is there because of the way all of the extraction and ventilation fans are placed in the ceiling space. I don’t notice it anymore but visitors always mention it.

Identity: Hmm…when I properly know the answer to that one I’ll have a marketing strategy.

How long have you been brewing for?
I used to watch my Dad brewing beer in the 70s and 80s, using recipes from, first, C J Berry, and then from Dave Lines. His favourites used to be clones of Marston’s Pedigree and Adnams Bitter. When I became old enough I used to sneak a pint out of his King Keg whenever I could.

Rough Draft has been up and running since July 2011 but, because of my existing day-job commitments, I only started the business of running a commercial brewery in a serious way from November 2011.

How did you get into brewing?
I love drinking beer. I love making beer. I love the whole science of making beer. I suspect I am a bit too geeky when it comes to this aspect of beer…I love all the detailed, technical aspects of the beer-making process. I would happily spend, and have happily spent, whole days investigating and researching one particular aspect of the brewing process, working out how it should work, seeing how it is actually working and thinking about how I can make it work better. Did I mention that I love drinking beer too? That is probably important.

What beers do you brew regularly?
When I started I wanted to develop a core range of five beers. In practice, the need to brew beer that would sell straight away so that I can start covering my overheads, has led me to concentrate, for the first few months at least, on just two of the beers. Now that this has happened – I am selling enough beer to pay the bills – I am now starting to develop the other beers. I spent last Sunday devising a whole load of new hop combinations and am making a start on the first of these this weekend. 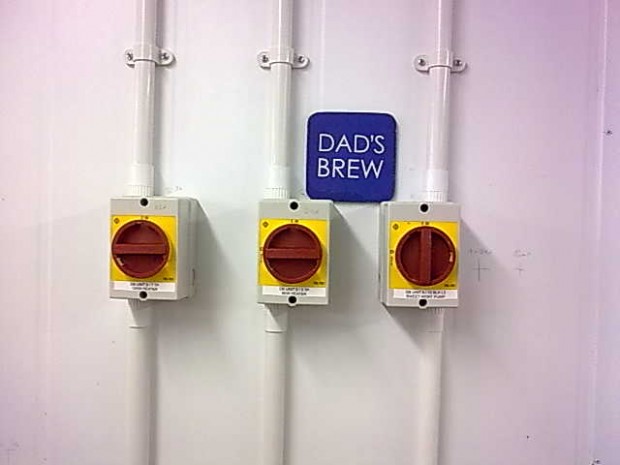 The two regular beers, which look like they are here to stay, are:

Leeming Gold 3.8% – a pale session ale, bitter and without any citrus (sorry, I am a bit fed up of the taste of C-hops in golden ales).

George Perkins 3.8% – a mid-brown, regular bitter made with three different UK and US hops. This beer is named after George Perkins, the father of one of my friends. George sadly died in Summer 2011, about the same time as the brewery was being built and we named this beer in honour of his memory. The pump clip for this beer shows a picture of George working out in Malaya during the Second World War.

Other beers that have made are Whistle Blower (4.5%), First Cut (4.3%) and a very successful winter beer called Slippery Slope (5.7%). March will see the production of a 4.8%, 35EBU, single-hop beer called Spring Thing being brewed. This will be the commercial version of a beer that won me a Best in Show at The Home Brew Forum’s Spring Thing competition last May. I have agreed with Wez at THBF that Rough Draft will pay royalties towards the forum’s upkeep for every cask of Spring Thing that is sold.

What special/seasonal beers do you brew?
The Winter beer was Slippery Slope. I’ll almost certainly make this one again. I have been asked to make a weaker version for general release during the year.

Spring-time will see the production of a 4.8%, 35EBU, single-hop beer called Spring Thing being brewed. This will be the commercial version of a beer that won me a Best in Show at The Home Brew Forum’s Spring Thing competition, held at the Church End Brewery in Nuneaton last May. I have agreed with Wez at THBF that Rough Draft will pay royalties towards the forum’s upkeep for every cask of Spring Thing that is sold.

As far as Summer and Autumn go…I’ll just have to see what I feel like making nearer the time.

I am making a Queen’s Diamond Jubilee beer called “Rough Diamond”. This will make its first appearance during May.

Where do you think the future of brewing lies?
Gut feel…that the supply side of the brewing industry will become an even more interesting place to be in the next few years. The microbreweries must survive the challenging economic conditions, and stay one step ahead of the big brewers as they attempt to take back from the micro-breweries both the initiative and innovation which we have created in the real ale market. 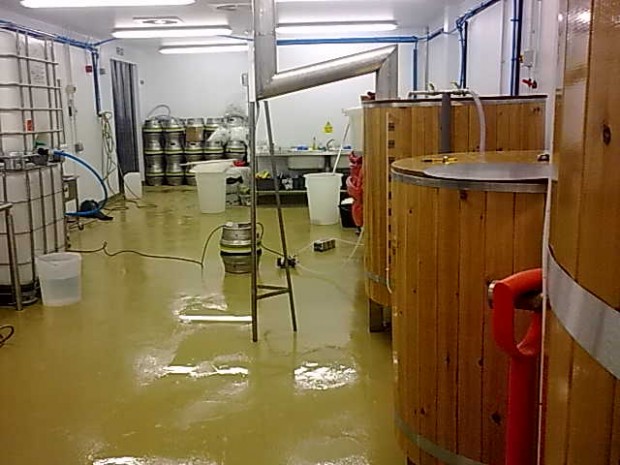 Do you bottle/keg/cask your beer?
At the minute I am concentrating on putting beer into casks for the pub trade and for festivals. I would like to start bottling later in 2012, but only when I am ready with the right bottle shape and labels which properly present the identity of the brewery and the beers. I would like to look into the possibility of packaging the beer into 5 litre mini-kegs.

What is you proudest moment in brewing?
Watching sixteen pints of my beer crossing the bar in the short time it took to have a very brief word with the Landlord of a North Yorkshire pub I had dropped in to check on how the beer was selling.

Do you have any brewing regrets?
That I didn’t do this 20 years ago.

What is your brewing ambition?
To have great fun making beer that people want to drink for as long as life gives me, and stay in touch at all times with my beer.

What was last beer you drank?
Honestly? A warm pint of Deuchars IPA…I was a long way from home and it was the only beer on hand pull.

What is your favourite hop and why?
Willamette…I love everything about this hop…its appearance, the feel of the hops, its leaf shape, its aroma, the flavour it gives a beer…everything. Hmm…reading that back makes me sound a bit weird.

What is your favourite beer/food combo?
Strong, pale, hoppy beer and a good hot curry. Neither a clever, nor an original choice…but it is what I would choose for my Final meal.

Do you have a Brewing hero/inspiration?
In my homebrew days, Graham Wheeler was my Brewing Hero. His book “Home Brewing” is the reason I became happily, and deeply, obsessive about beer making. 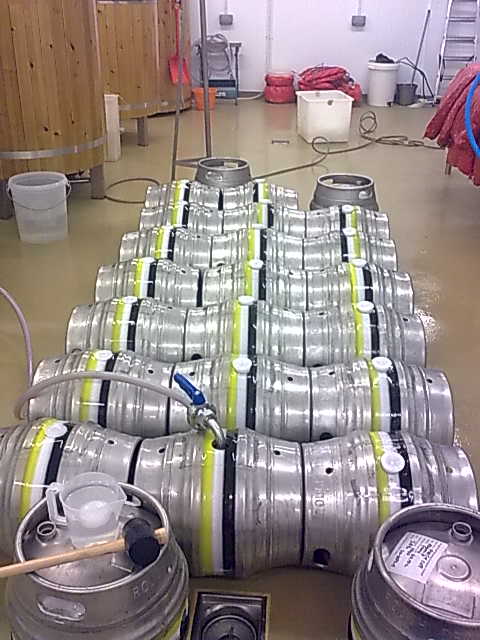 If you could brew one collaboration beer with someone who would it be with and what would it be?
I would love to brew with some of the brewers of old…the pre-war experts. Imagine what you could learn at the feet of their mash tuns?

Which beer do you wish you had brewed?
Ansells Bitter. Imagine what it would like with the input of today’s craft brewers?

How do you spend your time when you aren’t brewing?
Apart from constantly thinking about brewing and how to make a better pint of beer? I have a very normal home life with my wife and two boys.

If you could have one superhero superpower what would it be?
The ability to time-travel…is that a superpower?

Do you have a website/twitter/blog?
I have a really basic website at the minute…www.rough-draft-brewing.co.uk, It is a bit rubbish and I am getting some clever people to look at it and produce me a real one very soon.

Facebook /roughdraftbrewing (don’t confuse me with my good friends in San Diego).

Anything else you want to tell us?
Milton Jones is probably the funniest man in the Universe.