Posted on May 10, 2012 by andyMogg in Meet The Brewer, Springhead Brewery No Comments 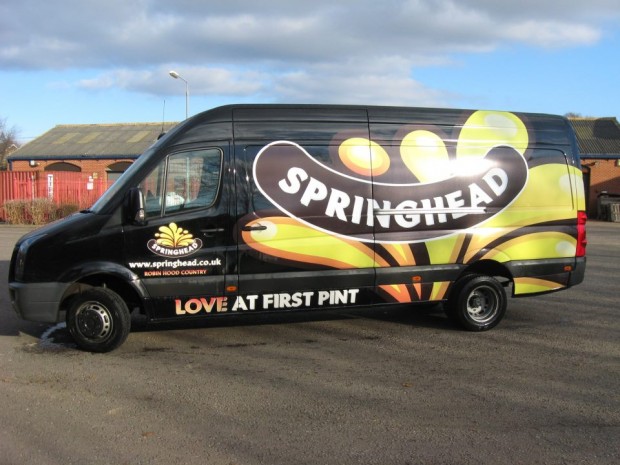 What is your Brewery name and where did it come from?
The Brewery is called Springhead. It comes for the name of the bend in the river Trent near where the original Brewery (the smallest brewery in Britain at the time) was founded.

What is your brewery capacity?
Our current capacity is 50 brewer’s barrels (BB) (that’s 8200 l, for all you modern metric types). Our kit consists of a 50 BB Mash Tun and Copper, with 4 75 BB fermentation vessels, to provide a bit of head room for any particularly vigorous fermentations. We are also now the proud owners of 4 new 55 BB conditioning tanks.

What is different about your brewery?
Always tricky question this… I guess what make us different from many of the breweries out there is our resolution to do things properly, without cutting corners. We only use the highest quality malt and whole dried hops, and we don’t add extra sugars or extracts in our beers. Any chef will tell you that  you have to use the finest quality fresh ingredients to make the best dishes, and making beer is no different. I have to admit, I’m also quite a fan of using additional natural ingredients to compliment the hops, so for example Bee’s Knees has wild honey in it, Maid Marian has over 150 fresh oranges to go with the Citra Hops, and the Spice of Life, one of our winter beers has juniper berries and cinnamon sticks thrown into the mix for that extra Christmassy taste. I’m not sure all that makes us unique, as there are some other pretty fantastic breweries out there, but we do our best to try and stand out.

How long have you been brewing for?
I’ve been working at the brewery for about 5 years now, but I’ve only really been brewing for the last 2 years. I work in partnership with another brewer (Richard Mallinson), who knows the kit backwards (and forwards too, handily), so we both handle slightly different parts of the job. I spent the first half of my life studying science, (well, at least the part where I wasn’t in the pub. Does that count as research now?) so armed with a little maths and biochemistry, I formulate the Recipes, and Richard then turns a sheet of numbers into delicious beer, and once we’ve had a chance to taste it, we both try and decide where I’ve gone right or wrong, so we can perfect the recipes.

How did you get into brewing?
Many years ago my Dad (Richard Scragg) decided that it would be a really nice idea to have a pint he could call his own. Since that fateful day, my Mum (Helen Teasdale) has been running the company. After about 10 years, I realised that it’s probably best not to trust them all by themselves, and joined them in the quest for my Dads perfect pint. I think we may have achieved in our mission now, (I think it happened somewhere between perfecting Roaring Meg, and the Robin Hood) but it turns out organising us all was still a bit much, so we’ve just roped my sister (Eve Scragg) in to help too. Good luck to her!

What beers do you brew regularly?
We have 6 core beers:

What special/seasonal beers do you brew?
We do a special every 2 months, although we rotate which ones we do from year to year. They are:

Where do you think the future of brewing lies?
I’m simply hoping that the good work that breweries have been putting in over the last 10-15 years can continue. It seems like more and more people are moving away from bland flavourless lagers and on to real craft ales, with some actual taste in them. If all the small breweries in the country can continue to improve the way we seem to be then perhaps one day you’ll never have to worry about getting a poor pint of beer when you order from a small brewery. Then the lager drinkers will have no excuse! It’ll make my job harder though!

Do you bottle/keg/cask your beer?
Yeah, we have four beers we bottle at the moment: Roaring Meg, Leveller, Maid Marian and Robin Hood.

What is you proudest moment in brewing?
Probably the second brew I ever did by myself, because it didn’t turn out like the first one! Although being told Willy’s Wheatbeer was the best out of all the beers from across the world that went into the Wetherspoons beer festival was pretty pleasing. I’ve spent the last two years perfecting all of our beers, so it was nice to get some recognition! Hopefully there’ll be a few more awards for us this year!

Well, like any brewer I’ve made a few mistakes along the way, but I’ve got a brilliant team around me with bags of experience; they usually manage to point out where I’m going wrong before it’s all too late, so I’ve nothing major to regret, yet.

What is your brewing ambition?
Well, I feel like we’ve only just got started getting Springhead running the way we want it to. It’s pretty exciting round here at the moment, with a new pub being built under my feet at this very moment (I can tell, they’re noisy buggers) a beer festival this weekend (with over 40 guest beers alongside a full complement of our own beers too, as well as being as busy as we’ve ever been. Usually my ambition at the moment it to make it through the week!

What was last beer you drank?
Other than the few I had to Q.C. this morning (it’s a hard life) I had a pretty sore head on Saturday morning thanks to a combination of Timothy Tailor’s Landlord and Kelham Island’s Pale Rider down at the Fat Cat in Sheffield. Not entirely sure which one I had last though, for some reason, although I can tell you they were both fantastic pints.

What is your favourite hop and why?
You know I have no idea. Usually the last ones I brewed with, to be honest. I brewed with a Polish hop called Marynka the other day that had an amazing aroma potential to it though. I’ll definitely be trying that one again.

What is your favourite beer/food combo?
I’m a massive fan of all things chilli infused, so anything hot and spicy. I cook a pretty mean Jambalaya, with a full head of garlic, full root of ginger and some of the Bhut Jolokia chilli’s I’ve got growing at home. That washed down with a newly pulled pint of Meg or Jaipur is pretty hard to beat.

Do you have a Brewing hero/inspiration?
My favourite brewery in the country is Thornbridge Brewey over in Bakewell, Derbyshire. I’ve never tasted a beer from them that’s less than fantastic.

When I stared brewing they were the benchmark I set for myself. I knew if all our beers were that good we’d be sorted. I’ll have to let the public decide if we’ve got there yet!

If you could brew one collaboration beer with someone who would it be with and what would it be?
I’d love to do a chilli beer at some point. I’m not sure with whom though. I’ve just waxed lyrical about the guys at Thornbridge, so they’d obviously be a fine choice, or perhaps Chris, who used to work at Brewlab. He obviously had such an amazing depth of knowledge.

Which beer do you wish you had brewed?
A few years ago I tasted a stilton porter. It was absolutely amazing, and I have no idea how they made it! I’m not entirely sure who did it either. I really want to say Brewters over in Grantham, but if anyone knows better let me know!

How do you spend your time when you aren’t brewing?
Rock climbing, mostly. It’s a bit of an obsession. Well, a lot of an obsession, if I’m honest. I try and fit seeing my friends / girlfriend, drinking, playing bass around that. If there’s time!

If you could have one superhero superpower what would it be?
Ah, the question that plagued my youth. I eventually decided I didn’t want to pick my own power. I think all the fun would be in learning how to use the power you are given as best as possible. I know that sounds like a cop out, but the best parts of all the superhero comics was the opening story. Well, in my opinion. And yes, I am a massive geek.

Do you have a website/twitter/blog?
Not a personal one. I never seem to have the time! There’s a Springhead website though, which my sister looks after. I’m sure she puts anything interesting on there. Oh, it’s www.springhead.co.uk, by the way.

Anything else you want to tell us?
Squirrels can run faster up trees than they can along the ground, 90% of all the living cells in your body are non-human, and cheese is the human invention of all time. Fact.