Posted on November 11, 2011 by andyMogg in Meet The Brewer, Tyne Bank Brewery 1 Comment

In anticipation of Twissup tomorrow here’s a meet the brewer with Mark from Tyne Bank Brewery, which we will be going for a look around.

What is your brewery name and where did it come from?
Tyne Bank Brewery. The name was chosen due the brewery being located on the banks of the Tyne just along from Newcastle’s quayside behind the famous free trade inn.

What is your brewery capacity?
The capacity of the brewery is 20BBL with 3 20bbl fermenters. 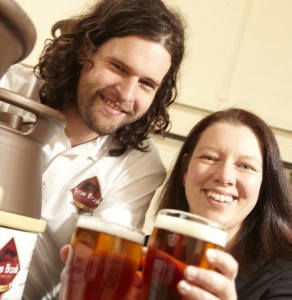 What is different about your brewery?
We are a new brewery and this gives us a lot of freedom when it comes to brewing new beers. There is no preconceptions of what our beers styles are like allowing us room to experiment. Due to the exciting boom time in U.K ale’s at the moment this has given us the confidence that there will be a market for a more varied range nationally and also in my home town of Newcastle and opens the door to tackle any beer which takes our fancy. As the tag line says “Born out of love for real ale and a passion to create.”

How long have you been brewing for?
Just over 3 years now.

How did you get into brewing?
By chance, I had just returned from 3 years of working and traveling around Canada, N.Z and the alps cooking, snowboarding, surfing, fishing and having a lot of fun but very skint! A very good friend of mine bobby beck a Herriot watt graduate was the head brewer at mordue brewery at the time who was relocating to Canada and invited me to help brew and take over the reins if I liked the job. I did, rob left a new career and passion began.

What beers do you regularly brew?
We brew three regular ales for the masses. Castle Gold, 3.9% English style pale ale with plenty of English hops throughout, sweet malt with citrus notes. Monument bitter, 4.1% amber/red, 5 malts blended to give a nice malty caramel background with U.S and English hops giving a berry/fruit flavour and aroma. We also have a 5% I.P.A depending on which hops are available, either way it’s bitter with obscene amounts of hop flavour and aroma! There is also a special brewed once a month which could be any style beer we fancy having a crack at.

Where do you think the future of brewing lies?
With the imagination of the brewers.

Do you bottle/keg/cask your beer?
We cask and have just started to bottle, as yet we haven’t jumped on the kegging bandwagon but we are looking into it with an idea to see our beer sail off to foreign lands.

What is your proudest moment in brewing?
Drinking a pint of my ale in the local pub and hearing some else order a pint of it from the bar. 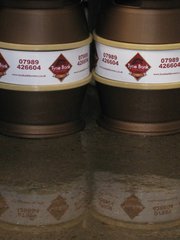 Do you have any brewing regrets?
No. Regret nothing you have only learned something.

What is your brewing ambition?
As im to old and into much debt to travel the world brewing it would be to help train the next generation of brewers and see where they can take things. Oh and win the GBBF.

What was the last beer you drank?
Durham brewery’s Bede’s Chalice a 9% Belgian triple. Beautifully balanced, lovely fruity notes and bags of flavour. My favourite Durham beer so far.

What is your favourite hop and why?
Today it is Nelson Sauvin, beautiful powerful aroma with tons of oil which gives the beer an extra viscosity. Mmm Nelson Sauvin

What is your favourite beer/food combo?
Due to my financial situation I rarely get the chance to eat food of the standard of the beer I drink, so I have little knowledge on the subject but I do know they all go well with chips!

Do you have a brewing hero/inspiration?
Doug Odell and his philosophy on brewing beer.

If you could brew one collaboration beer with someone who would it be with and what would it be?
It would be with Doug Odell and the beer would be a double I.P.A

Which beer do you wish you had brewed?
Haven’t drank it yet still researching.

How do you spend your time when you aren’t brewing?
Drinking beer, reading about beer, surfing, snowboarding, fishing and spending quality time with family and friends.

If you could have one superhero power what would it be?
The healing powers of Wolverine.

Anything else you want to tell us?
No time got to start transferring. Keep on brewing!