Posted on December 15, 2011 by andyMogg in Meet The Brewer, The Big River Brewery No Comments

What is your Brewery name and where did it come from?
Our Brewery is called ‘The Big River Brewery’, we called it that because we’re right next to the River Humber and given that it drains something in the order of 1/3 of the UK it seemed right to give a nod in that direction.

What is your brewery capacity?
We have a nano-brewery at ½ a barrel with bigger ambitions to scale up to something a little larger in the not too distant future.

What is different about your brewery?
We like to play about with ideas and experiment with old dusty relics of recipes we find and see how they turn out. We keep our own bees and use their honey in our spiced honey beer (despite my being allergic to their stings!!). 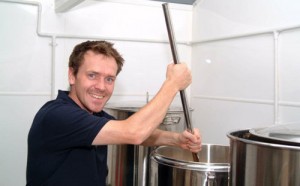 How long have you been brewing for?
We launched our brewery in Sptember of 2011

How did you get into brewing?
Quite by accident, I have always been interested in good food and drink, brewing came about after we played around with an old family ginger beer recipe that used toast and other odd things and it led to more experiments and to where we now find ourselves. Though it was spurred on by a radio interview we heard whilst sat in traffic on our way home from holiday.

What beers do you brew regularly?
We’ve been really happy with our ‘Big Red’, it’s a really easy going ruby red beer with a strong malt character with a subtle undertone of autumn berries and a little bit of an apple finish. It is always the first to go on farmers markets and has proven really popular with our customers. Our other beer include ‘Halcyon Daze’, ‘ Wind Jammer’ and ‘Rope Walk’.

What special/seasonal beers do you brew?
My brother is currently working in Antarctica in support of expeditions and I’m looking at making a beer for his return in Spring called ‘Penguin Parade’ with a good fistful of Glacier hops.

Where do you think the future of brewing lies?
I am really encouraged to see more and more people trying real ale for the first time and i’m pleased to see more younger people spurning churned out lager in favour of a good real ale. I really think brewing is taking off massively and it is great to see that a real choice and variety is now available.

Do you bottle/keg/cask your beer?
Bottle conditioned and cask.

What is you proudest moment in brewing?
As we are only small and only recently started we have yet to really punch out, however we did produce a souvenir ale for Pocktoberfest and we were really happy to see it sail out at this music and beer festival.

Do you have any brewing regrets?
Only that we didn’t start earlier.

What is your brewing ambition?
To see our beer in some far flung flung corner of the country and see it being enjoyed.

What was last beer you drank?
It was a pint of another local breweries beer called ‘Bad Kitty’.

What is your favourite hop and why?
We’re very lucky in that where we live there is a great deal of countryside on our doorstep and we enjoy foraging and following the seaonal treats. I have found some wild growing hops, although I have yet to brew with them I have eaten the hop shoots in spring and they’re just like a really delicate asparagus. The aroma is something to behold and I can’t wait for next year to catch the cones before they turn.

What is your favourite beer/food combo? Steak and Ale Pie, no question.

Do you have a Brewing hero/inspiration?
Anyone who has started from scratch and has produced some really exceptional brews.

Which beer do you wish you had brewed?
‘Bad Kitty!!’ bloody good beer.

How do you spend your time when you aren’t brewing?
Bee keeping, flyfishing and trying to get outdoors.

If you could have one superhero superpower what would it be?
Invisibility, i’d love to hear what people say about my beer behind closed doors.