Posted on February 10, 2011 by andyMogg in Captain Cook, Meet The Brewer 1 Comment

This weeks Meet the brewer comes from a brewery just up the road from me The Captain Cook Brewery in Stokesley and from Matt Power (soon to be Truefitt) so here goes.

What is your brewery capacity?
These are exciting times for the brewery, we recently started to brew 4x4BBL instead of 3, we are increaseing the size of the plant to 4X6BBL, Plus a pilot 2.5BBL brew fermenter fopr specials to keep up with demand. 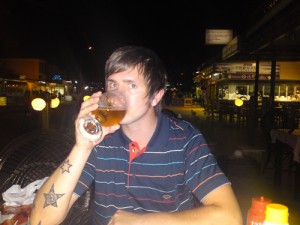 Enjoying a beer on holdiday

What is different about your brewery?
Nothing different but we strive to produce great honest beers, beers that are themed around the history of Captain Cook

I’ve been working in the industry for 6 years and brewing for 3 years.

How did you get into brewing?
I kind of fell into a brewery assistand postition then it started from there, I started to home brew and caught the bug, the rest, as they say is history.

What beers do you brew regularly?
All the beers are themeed around Captain Cook, we have a core range of 5 beers, including Endeavour and Easter Island.

What special/seasonal beers do you brew?
We recently brewed a simple blonde beer hopped only with cascade, named Heights of Abraham, we now have plans to brew a special once a month.

Where do you think the future of brewing lies?
More of the same over the next couple of years, with the craft scene gainging growth.WITH THE CRAFT SCENE GAINING GROWTH ALSO

What is you proudest moment in brewing?
Just brewing beers that people comment on and enjoy.

Do you have any brewing regrets?
Not living closer to Brewdog

What was last beer you drank?
A pint of our Slipway and bottles of Sierra Nevada Pale Ale, oh and some Timothy Taylor Landlord.

What is your favourite hop?
Cascase or pacific gem, it dpeends on my mood, there are so many to choose from.

What is your brewing ambition?
To keep brewing beer and expanding the brewery to it’s full potential.

If you could brew one colab beer what would it be and who would it be with?
Probably with Brewdog as I just think they keep pushing the boundaries

Which beer do you wish you had brewed?
Timothy Taylors Landlord as I wouldn’t have to do telesales.

If you had one superhero superpower what would it be?
Spiderman

Anything else you want to tell us?
Our brewery taps are the White Swan in Stokesley and the Dog and Gunn at Potto.