Posted on March 10, 2011 by andyMogg in Brouwerij de Molen, Meet The Brewer 1 Comment

This week Meet the Brewer comes from one of my favourite overseas breweries, housed in an iconic mill, its Menno from Brouwerij de Molen

What is your Brewery name and where did it come from?
Brouwerij de Molen which means Brewery the Mill. We are located in a historic mill build in 1697. 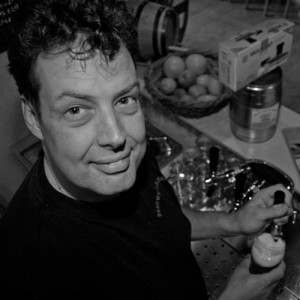 The man him self.

What is your brewery capacity?
Currently 5 hectolitres (1200/year). We are building a new brewery: 25 hectolitres, 4500/year.

What is different about your brewery?
We’re not just making beer. We live, breath and adore beer. We try to make easy going session ales and extreme beers like imperial stout and barley wine. But all of them heavily hopped. We also have set socially involved goals: environment friendly, we have mental handicapped people working for us and we try to upgrade Dutch beer culture.

How long have you been brewing for?
19 years

How did you get into brewing?
It all started as a hobby. I went from clint brewer to brewer at Texelse and Prael. Soon I just had to start my own brewery which happened in 2004.

What beers do you brew regularly?
Myself, I brew no beers regularly. This is done by 2 other brewers. I mainly invent new recipes. Beers brewed most at our brewery are Hel & Verdoemenis, Bommen & Granaten, Donder & Bliksem, Op & Top and Vuur & Vlam. 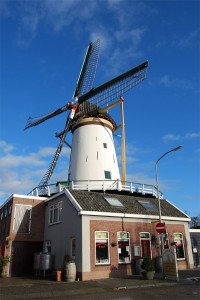 Brewery in the Mill

What special/seasonal beers do you brew?
We brew many special beers. Our own favorite is Hel & Verdoemenis Wild Turkey. This is our regular Hel & Verdoemenis aged on Wild Turkey bourbon barrels. In spring we make a weizenbock called Jong & Onbedorven. In autumn we have a Dubbelbock.

Where do you think the future of brewing lies?
We see a rising interest in more hoppy and complex beers. The sweet and carbonated Belgian ales are losing terrain. At least in Holland they are. Lagers will always be big over here I’m afraid. But our well hopped bitter called Op & Top is starting to get popular among the beerlovers.

Do you bottle/keg/cask your beer?
Most of our beer is bottled. We keg a lot as well. For the export we use KeyKegs : disposable kegs. We also use wooden (gravity) casks but mainly for beer festivals.

What is you proudest moment in brewing?
Every time we get fan mail. On a daily bases people e-mail us telling us how much they love our beers. Amazing! Thanks!

Do you have any brewing regrets?
Not really. Yeah, of course now and then some new brew doesn’t turn out completely as expected. But that’s just how it works.

What is your brewing ambition?
Getting our new brewery up and running. We bought a new brewhouse. Five times as big as our current but still stay a small player in the field. 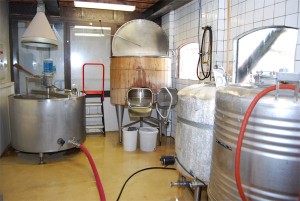 Where the magic happens

What was last beer you drank?
Russian River Pliny the Elder, wonderful balance.

What is your favourite hop and why?
I love hops. It’s like children, you can’t name a favourite one.

What is your favourite beer/food combo?
Op & Top with an old ComtÃ© cheese. They go so well together. As if they were made for each other.

Do you have a Brewing hero/inspiration?
I’m not the kind of person to follow others or even put anyone on a pedestal. But I love what Hage from NÃ¤rke (Sweden) is doing.

If you could brew one collaboration beer with someone who would it be with and what would it be?
The brewer of Three Floyds (Indiana, USA) or Cigar City (Florida, USA). And it would be either an Imperial Stout as we are all 3 well know for that. Or going the opposite way and make something we’ve never done before.

Which beer do you wish you had brewed?
I’ve said this before, so maybe it’s getting old. But how about Mesopotamian Ale. Because that’s when it all started.

How do you spend your time when you aren’t brewing?
Spend some time with Bea, my wife. And besides that: drinking beer, reading about beer, talking about beer.

If you could have one superhero superpower what would it be?
Turning people into beer lovers by pointing my finger at them 🙂

Anything else you want to tell us?
In September we organize our beer festival for the third time. We only invite the best breweries possible so be sure to visit. More info can be found on our website in the near future.

Big thanks to Menno for taking the time out to fill this in for us, I hope you enjoy reading it.