Posted on April 29, 2010 by andyMogg in Breweries & Pubs, Meet The Brewer, Okells 1 Comment

This weeks Meet the Brewer is Mike from Okells, I first encountered Okells a while back when I tried one of their beers in a local pub, soon after I noticed that our local cheap shop had cases of their Dr Okells IPA very very cheap so I bought a load and it was delicious, in fact it was one of my beers of last year.

What is your Brewery name?
Okell and Son Ltd., a subsidiary company of Heron and Brearley Ltd 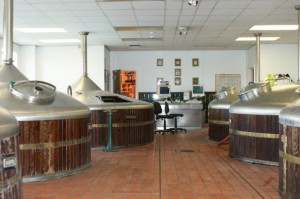 What is your brewery capacity?
Brew length is variable between 20 -60 brls and can do two 60 brl brews in a day if needed.

What is different about your brewery?
Built in 1994 and is almost completely computerized. We also have a vapour recovery system on the Copper. We have a very well equipped Brewery Lab and participate in BAPS, the Brewing Analytes Profficiency Sheme run by HM Govt Chemist

How long have you been brewing for?
Since 1850

How did you get into brewing?
Did a B.Sc in Microbiology at Newcastle University, couldn’t decide on a career and looked around for an M.Sc to do. Saw Birmingham University did one in Brewing and thought why not, I enjoy drinking beer so I’ll learn about making it. Then carried on to do a Ph.D in Brewing

What special/seasonal beers do you brew?
Aile is produced mainly for bottling and sells nearly exclusively to Finland. Maclir is bottled and IPA. Seasonals are Spring Ram, Summer Storm, Autumn Dawn and St Nick

Where do you think the future of brewing lies?
Cask beers future is in the hands of Craft Brewers who can make Individual beers that stand out from the crowd

What is you proudest moment in brewing?
Commisioning the new brewery in 94

Do you have any brewing regrets?
Not being able to export more of our beer to the UK

What was last beer you drank?
Okells bitter

What is your favourite hop?
Amarillo and Nelson Sauvignon

What is your brewing ambition?
To win GBBF

Do you have a Brewing hero/inspiration?
I inspire myself ;o)

Which beer do you wish you had brewed?
I’ve brewed it, Okells Alt

Favourite hobby outside of brewing
The Gym