Posted on October 2, 2012 by andyMogg in Axholme Brewing Company, Meet The Brewer 1 Comment

What is your Brewery name and where did it come from?
Axholme Brewing Company. It is named after where I live, the Isle of Axholme (an inland river island in North Lincolnshire)

What is your brewery capacity?
2.5 brewers barrels, or 410L if you prefer. 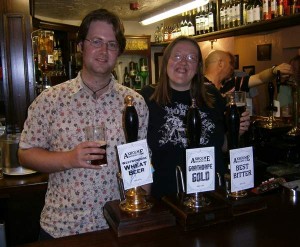 Our small size allows us to brew experimental beers without too much risk if it comes out a bit weird, but I also like to concentrate on getting classic beer styles right. We are straddling the traditional/wacky divide and hopefully there is something for everybody.

How long have you been brewing for?
At Axholme Brewing Co. for three months, but personally for almost 9 years.

How did you get into brewing?
I had an extensive homebrew operation whilst studying at Sheffield University, and after I graduated my friend Rich Hough suggested me for a job at Abbeydale. I worked there for five years before leaving to help set up Thorne Brewery in 2009. When the brewery owners sold up in early 2012 I decided I’d really rather be my own boss and started Axholme with my wife Jules.

What special/seasonal beers do you brew?
We brew a new beer almost every week, just 10 casks of each and then we move onto the next one. It keeps things interesting.

Where do you think the future of brewing lies?
The bigger micros are going to keep growing and buying up pubs until they become regionals, and another part of the industry will concentrate on keeping things small, craft brewing and attention to detail. More and more pubs are brewing for themselves too, which I quite like.

Do you bottle/keg/cask your beer?
Our beer is sold in casks and we’re just starting to sell in bottles.

What is you proudest moment in brewing?
It happens every time I’m sat in a pub and I overhear someone buying one of my beers and proclaiming that they like it.

Do you have any brewing regrets?
When I worked at Thorne I got talked into making a beer for the 2010 World Cup. The beer was fine but urgh… “England Pride Pale Ale”… not really my thing.
What is your brewing ambition?
I’d really like a small bar, so I can engage directly with the drinking public.

What was last beer you drank?
It was actually Abbeydale Fargate at the Scunthorpe Beer Festival. 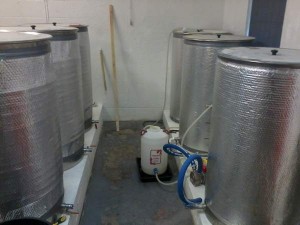 I don’t really have one, they each have their own purpose. I get a bit bored of the same old citrusy flavours though. I enjoy the sort of peppery flavours you get from some English hops.

What is your favourite beer/food combo?
There is certainly a beer for every food, but you can’t beat a bitter with some pie and mash. Either that or an IPA with a Thai curry.

Do you have a Brewing hero/inspiration?
Having drifted into it via homebrewing I’ve always been most inspired by ordinary people making beer (or wine, cider or anything for that matter) using whatever materials and engineering know-how they can get their hands on.

If you could brew one collaboration beer with someone who would it be with and what would it be?
There is a new hop grower fairly near to us (over the water in East Yorkshire) and we’re hoping to do a green hopped beer next year.

Which beer do you wish you had brewed?
I wish I’d been the first person to think of putting beer in old whisky or rum casks.

How do you spend your time when you aren’t brewing?
Helping in the garden and allotment (my wife and I are both on the committee of North Axholme Allotment Society). When I had more time I liked walking and cycling.

If you could have one superhero superpower what would it be?
I would like to be immortal so I could do everything on my to-do list. It’ll take me about 900 years.