Meet The Brewer: Mikkel from Mikkeller

Posted on December 31, 2009 by andyMogg in Breweries & Pubs, Meet The Brewer, Mikkeller 1 Comment

In this week’s Meet the Brewer feature, Mikkel from the legendary Danish brewery, Mikkeller answers our questions.

For those of you who haven’t heard of Mikkeller I suggest you try your best to track down some of their beers, every single one that I have had has been top notch, especially Stateside IPA and Beer Geek Breakfast, If you are wondering why I haven’t reviewed them on here it’s just because I’ve got a huge backlog of reviews so watch this space for rather a lot of Mikkeller beer reviews, anyway enough of me, over to Mikkel:

What is your brewery capacity?
Unlimited since I brew at many different breweries

What is different about your brewery?
Don’t have an actual brewery but brew Mikkeller beers at many different locations.. 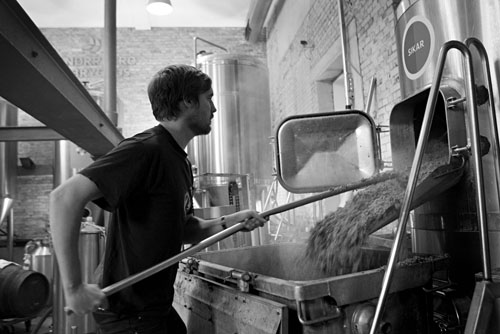 How long have you been brewing for?
Mikkeller is 3½ years old

How did you get into brewing?
Homebrewing

Where do you think the future of brewing lies?
Where the quality is..

What is you proudest moment in brewing?
Brewing with Alesmith and Stone

What is your favourite hop?
Simcoe

What is your brewing ambition?
To make new and great beer<

Do you have a Brewing hero/inspiration?
Kris from De Dolle Brouwers

Which beer do you wish you had brewed?
Stille Nacht from De Dolle

Thanks to Mikkel for taking time out to fill this in, to find out more about Mikkel and his amazing Mikkeller beers visit his website and keep an eye on beer reviews as I type up my thoughts on the Mikkeller beers I’ve drank.

One comment on “Meet The Brewer: Mikkel from Mikkeller”