Posted on May 6, 2010 by andyMogg in Breweries & Pubs, Stone Brewing Co 4 Comments

This week’s Meet The Brewer comes from the far away land that is the USA, from a brewery I love and wish I could get more of their beers (although a brewery in Europe might be on the cards), from a man with possibly the best name in brewing (aside from Randy Mosher) it’s the man who needs no introduction – It’s Mitch Steele from Stone Brewing Co.

What is your brewery capacity?
Hard to say as we are growing very fast and adding capacity continuously. Last year we sold just over 98,000 bbls, and this year we’re looking to be somewhere around 120,000 bbls. 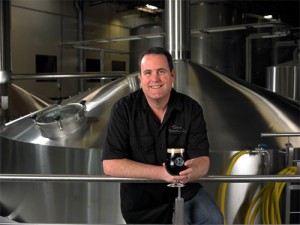 Mitch Steele, that is all!

What is different about your brewery?
Well, we have a (well-deserved) reputation for brewing big, bold beers that are aggressively hopped. But more importantly I think, we’ve always approached our beers as being beers that we really want to brew and drink ourselves. We have never looked at â€œconsumer trendsâ€ or used marketing tools like focus groups to determine what we should brew. The beers we brew have to be inspiring and challenging for us as brewers.

On the business side, several key points stand out. First is our commitment to ethical business practices. We never give away anything, including beer or promotional items, to encourage people to purchase and sell or serve our beer. We’ve been that way since day 1, and this is a highly unusual practice in certain parts of the United States.

We also are deeply committed to the craft brewing industry as a whole. A large part of our company is a Distribution business (Stone Distribution Co.), and we distribute well over 30 excellent breweries’ beers through our business. And if you visit our Stone Brewing World Bistro and Gardens, you’ll see over 30 beers on draught, and even more available in bottles, from great brewers all around the world. We very strongly believe that promoting the entire craft beer business makes us better at what we do.

Additionally, we are deeply committed to running our business with a focus on sustainability and responsibility to our planet. We power much of our business with solar power, we use biofuel to power our delivery trucks, we recycle as much as possible, and we are constantly evaluating our business practices to ensure that we are using the least impactful processes to get our beer out to our fans. Our restaurant uses locally grown produce and meats for our dishes, and we are looking at installing an innovative way to reclaim and recycle water.

How long have you been brewing for?
I’ve been professionally brewing for 22 years. Stone Brewing Co. is celebrating our 14th Anniversary this summer, and I’ve been with Stone for 4 years.

How did you get into brewing?
I was an Enology major at University of California, Davis, and was in a microbiology class when Dr. Michael Lewis guest lectured and provided a brief overview of the brewing process. I was hooked! 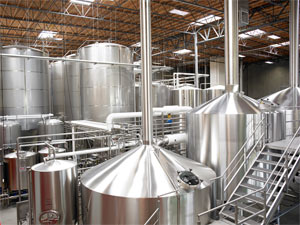 Inside the Stone brewhouse

What special/seasonal beers do you brew?
We brew several special release beers each year. These would include Double Bastard Ale, Stone Old Guardian Barley Wine, Stone Imperial Russian Stout, an Anniversary beer every summer (the recipe changes every year) and our Stone Vertical Epic series of beers, each one is Belgian inspired with a unique recipe. In addition, we brew collaboration beers with 2 other craft brewers about four times per year, and we have the occasional â€œone-brewâ€ special beers. We like to keep things fun, interesting, and creative!

Where do you think the future of brewing lies?
Hard to say, but I hope craft beer continues to grow in the United States, England, and everywhere else, You can see it happening, and people everywhere are looking at beer at more than just a pub beverage or something to drink during a ballgame.

As far as beer styles go, I’m curious to see if IPA will continue its growth to become an extremely very popular style here in the United States. And whether sour beers will gain any sort of acceptance on more than a niche level.

What is you proudest moment in brewing?
I’ve had lots of things I’m proud of.

I’m very proud of the work I did on new products and beer formulation for Anheuser-Busch in the mid 1990’s. We were trying to raise awareness about beer variety within the company and our wholesalers, and also trying to demonstrate to beer drinkers and the beer media that AB had very skillful brewers, and I think we achieved that to some extent, despite all the obstacles.

I’m quite proud of the brewing team we’ve put together here at Stone, and the beers we have brewed, they just keep getting better and better!

Being asked to co-author a book on the history of brewing IPA is another thing that I’m honored and humbled by.

What was last beer you drank?
Black Market Brewing’s Dunkelweizen, they are a new brewery in my hometown and they make great beer.

What is your favorite hop?
I really like Centennial, we use a lot here at Stone, and it is the signature hop in our Stone IPA. But, like most brewers, I’m always looking for new varieties to try, some of my favorites that we haven’t used yet in our beers to any great extent include Citra, Strisselspalt and Target. We went through a period a couple of years ago where we started using a lot of Amarillo, and it’s a great hop, very unique aromatics.

What is your brewing ambition?
To continue learning about technical brewing, beer styles and brewing history. To never stop learning!

Do you have any brewing regrets?
None worth dwelling on. I’m in a great place now, so any regrets I might have had aren’t really worth worrying about.

Do you have a Brewing hero/inspiration?
I have plenty of inspirations: Dr. Michael Lewis, my brewing professor at Cal Davis, craft brewing pioneers Fritz Maytag and Ken Grossman, Greg Koch and Steve Wagner (the cofounders of Stone Brewing Co), all the brewmasters at Anheuser-Busch who taught me to be detail oriented and to never sacrifice quality for any reason, and all the current craft brewers who are being extremely creative and provide inspiration for me on a daily basis.

Which beer do you wish you had brewed?
The first batch of IPA shipped to India!

Favorite hobby outside of brewing
I play guitar in a hobby band with a good group of guys. We play out about twice a month and its great fun. We play classic rock and blues.

A really big thanks goes out to Mitch for filling this in, I know he has been a busy man of late, you can check out the excellent Stone Brewing Co website here, join them on facebook here, read their blog here and a follow them on twitter here

If you are quick you can also buy their beers from Beer Ritz in Leeds, as they have them in, not sure how long they will last.