Posted on May 30, 2013 by andyMogg in Natural Selection Brewing No Comments

What is your Brewery name and where did it come from?
Natural Selection Brewing. I don’t quite know the origin, I guess it just evolved. (I love bad puns)

What is your brewery capacity?
We are working with Stewart Brewing Co. In Edinburgh and brew out of their facillity. Luckily they just opened a new place that we get to play in!

What is different about your brewery?
We are part of a pretty unique and exciting project. We are all getting our master’s degrees from Heriot-Watt University and being part of Natural Selection is our master’s project. Natural Selection brewing was started three years ago by Steve Stewart of Stewart Brewing and Prof. David Quain of the International Centre for Brewing & Distilling at Heriot-Watt. Each year four students are chosen to create a beer and take it from concept through to market. It allows us an opportunity to gain understanding into what it takes to run a brewery. While the team and beer differ from year to year, the name and reputation continue on. 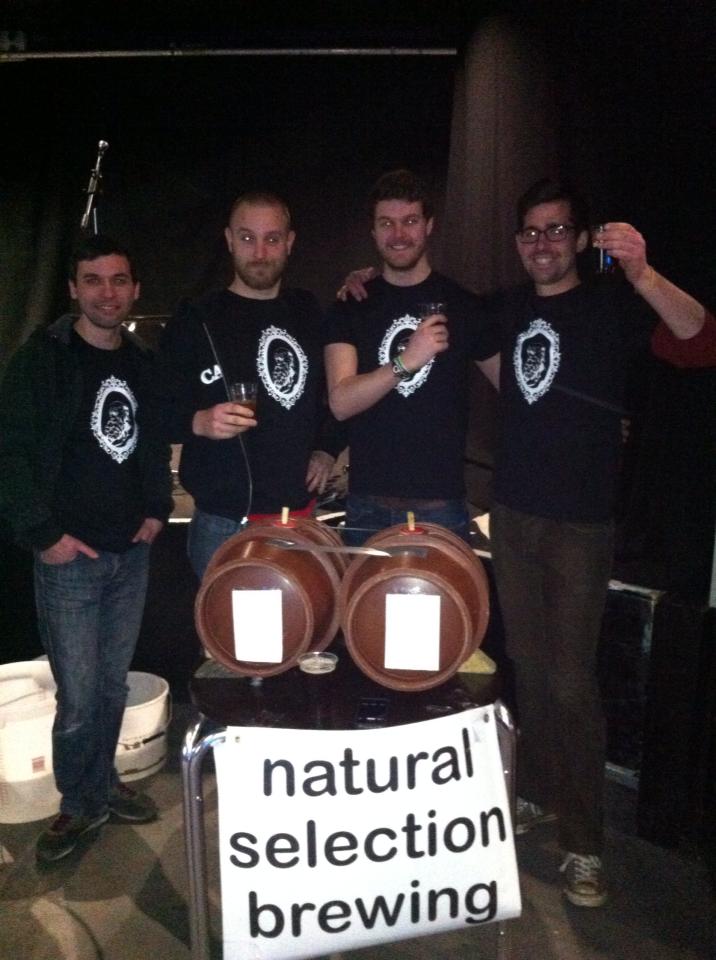 How long have you been brewing for?
Each of us  has brewed professionally in various capacities prior  to coming to Heriot-Watt. I worked at Durango Brewing Co. In Durango, Colorado, USA for 18 months beofre coming to Edinburgh.

How did you get into brewing?
We all started as homebrewers and eventually found the opportunity to take the plunge into working in breweries fulltime.

What beers do you brew regularly?
As mentioned earlier, each year the team releases one beer available the summer of their respective year. The beer is brewed once and thats it. The first beer was Finch, a hoppy American style amber. Last year was Anorak, a sessionable wheat beer. This year we are releasing Origin, a Rye Saison brewed will all Australian and New Zealand hops. Each year output has doubled over the previous. The first year they brewed 10bbls and this year we slated to brew 40!

Where do you think the future of brewing lies?
Britain is going to keep growing like crazy for the next decade. Its a very exciting time to be a brewer in the UK. I expect Edinburgh will see more and more breweries opening in the city sooner than later.

Do you bottle/keg/cask your beer?
All three we don’t discriminate.

What is you proudest moment in brewing?
It will be when I see the first pint of Origin poured at the bar.

What is your brewing ambition?
I think all of us would like to open our own brewery one day.

What was last beer you drank?
Sierra Nevada Pale Ale. Its funny as the craft brewing movement continues to thrive its easy to forget how good a SNPA is. I have the utmost respect for Sierra Nevada for being able to continue to put out such a high quality beer.

What is your favourite hop and why?
While I love the huge fruit forward hops coming from NZ and Australia, if I had to pick one hop it would be Cascade.  It is such a versatile hop that can be used for any number of styles.

What is your favourite beer/food combo?
Lately I have been really into beer and cheese pairings. There are so many possible flavour combinations  and beer is perfect foil for good cheeses. One of the best ones I have had recently is Isle of Mull cheddar with a big, resiny IPA. The malt backbone is a nice match for the sharpness and slight saltiness of the cheddar while the hops keep the pallet fresh and looking for more. We are hosting a beer and cheese night where we pair three vastly different cheeses with our Saison. Its great how different aspect of the beer work with each cheese.

Do you have a Brewing hero/inspiration?
I really look up to the men and women

who pioneered this industry. While it is still no easy task to open a craft brewery, these guys had the added burden of starting the whole movement! I am especially inspired by the breweries that have allowed their progressive ethos to permeate all aspects of their company. It is refreshing to see an industry where environmental sustainability and employee quality of life is part of the mission statement.

If you could brew one collaboration beer with someone who would it be with and what would it be?
Brasserie Dupont, they set the standard for Saisons!

If you could share a pint with someone dead or alive who would it be, what would be the beer and where would you have it?
I would love to go back in time to when Saisons were still brewed by individual