Posted on January 27, 2011 by andyMogg in Meet The Brewer 2 Comments

This week’s meet the brewer comes from the depths of lovely Yorkshire and a brewery who’s beers I’ve been drinking for as long as I can remember.

What is your brewery capacity?
420 UK Barrels a week

What is different about your brewery?
We are able to brew both traditional English ales and Continental style beers on our plant

How long have you been brewing for?
10 years (4 years at Daleside and 6 years at Copper Dragon) 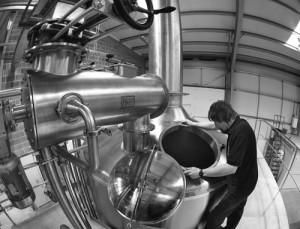 Oliver in the brewery

How did you get into brewing?
I’d say it’s a mixture of being pushed and falling into the industry. My Father has been an active member of CAMRA for over 30 years and has a chain of pubs in Yorkshire so I learnt to appreciate decent beer from him. That and I also happened to walk into the Job Centre on the right day after leaving school!

Where do you think the future of brewing lies?
With the market for Real Ale continuing to become a little crowded for competition but with, over time, the cream rising to the top. It will also be interesting to see whether the English ale market will begin to keg more beers and follow on from the American craft brewing scene?

What is your proudest moment in brewing?
One of the first recipes I created (Pride Of England) at Daleside won â€˜Overall Champion’ at Norwich & Norfolk Beer Festivalâ€¦unbeknown to me that it had even been
entered.

Do you have any brewing regrets?
Leaving valves open when they should be closed.

What is your brewing ambition?
To carry on producing beers that are widely received and greatly appreciatedâ€¦I like making people fall over for a living! 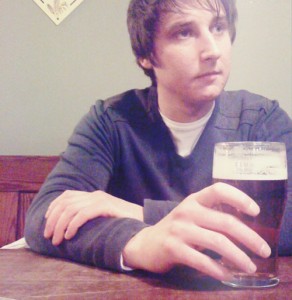 What was last beer you drank?
Utility Special (Marble Brewery)

What is your favourite hop and why?
Chinook – I love the grapefruit notes this hop gives to beer which can leave a very more-ish aftertaste, although I’m not too keen on grapefruit as a fruit.

Do you have a Brewing hero/inspiration?
I find Sean Franklin’s humble approach to brewing and his innovative way of blending hops something of great intrigue. Also, Craig Witty gave me the opportunity to get started in the industry, brewing a wide variety of beers along the way, and showed alot of trust in me to create several beers whilst working for him. Since then, working for Gordon Wilkinson at Copper Dragon, I have learnt the importance of consistency in production to achieve the highest quality 100% of the time.

If you could brew one collaboration beer with someone who would it be with and what would it be?
Dann Paquette from Pretty Things Beer & Ale Project as we share the same ideals about beer. What would it be?…a beer based on a
mixture of English and American traditions?

Is there a beer you wish you had brewed?
60 Minute I.P.A (Dogfish Head) : I like the concept behind it. A beer that has raised the bar a little higher.

How do you spend your time when you aren’t brewing?
With my girlfriend and our dog, watching football (Sheffield Wednesday) and cricket, listening to music and going to comedy gigs. I’m also trying my hand at painting with acrylics.

If you could have one superhero superpower what would it be?
The inability to suffer hangovers.