Posted on April 14, 2011 by andyMogg in Meet The Brewer, Ossett Brewery 3 Comments

This week’s Meet the Brewer comes from a brewery I visited a couple of years ago, they make some delicious beers which are pretty easy to get hold of and quite often make an apperance in pubs round here.

What is your Brewery name and where did it come from?
Ossett Brewery, named after the small town in West Yorkshire where we are located. For the uninitiated, we are about 10 miles south of Leeds.

What is your brewery capacity?
40 barrels per brew, 200 barrels per week flat out. Probably something like 17,000 hl per annum in modern money – if my sums are correct. 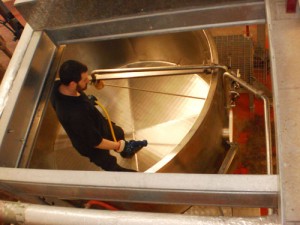 What is different about your brewery?
It is extremely hands-on for a brewery of its size. While a little automation would be nice, the fact that we need to scrub everything by hand every day gives me confidence that everything is as clean as possible.

How long have you been brewing for?
Commercially for ten years. As a homebrewer for more than 20.

How did you get into brewing?
As an experienced home-brewer and enthusiastic consumer of Ossett beers, the job of brewer at Ossett was a dream one for me, but rather boringly I got the job when it appeared as a vacancy in the local paper.

What special/seasonal beers do you brew?
Ossett has a seasonal beer calendar which features one different beer per month. Some of these are old favourites and some are brand new beers. We tend to feature darker, heavier beers in the colder months and paler, hoppier ones when it (hopefully!) warms up.

Where do you think the future of brewing lies?
Continued dominance by the usual bland international brands produced in factories, but with a pleasing minority moving more towards locally produced craft products.

Do you bottle/keg/cask your beer?
The majority of Ossett beers are sold in cask conditioned form. Yorkshire Blonde (at a premium 4.5%), Excelsior and Treacle Stout are available filtered but not pasteurised in bottle. 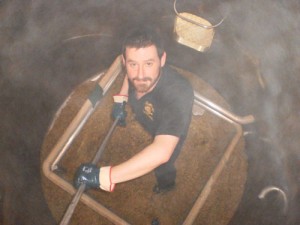 Paul getting hot and steamy

What is you proudest moment in brewing?
Excelsior being voted the Overall National Champion beer in the SIBA beer awards 2003

Do you have any brewing regrets?
None at all.

What is your brewing ambition?
My wife is Russian. I would love to see my beers for sale in that country so that her friends and family can see what all the fuss is about. Russia is a big potential market for English ale and I would like to be part of it.

What was last beer you drank?
Ossett Treacle Stout at the Thomas Sheraton in Stockton-on-Tees.

What is your favourite hop and why?
At the moment, probably American Centennial – good bittering and wonderful flavour/aroma combination. Having said this, along with other brewers I have been very impressed by the new Citra variety which produces beers with a unique tropical fruit character.

What is your favourite beer/food combo?
Beer and crisps.

Do you have a Brewing hero/inspiration?
Sorry, but I don’t do hero worship.

If you could brew one collaboration beer with someone who would it be with and what would it be?
I would love to spend some time in the US, meeting some of the craft brewers over there. The opportunity to brew one of their amazing extreme IPA’s would be one I would relish.

Which beer do you wish you had brewed?
The original Russian Imperial Stout.

How do you spend your time when you aren’t brewing?
Being a family man who supports Huddersfield Town, reads a lot, enjoys going to the opera and carries out “Quality Control” and “Competitor Research” in the pub as often as possible.

If you could have one superhero superpower what would it be?
The ability to dig a tonne of hot spent malt out of a mash tun without breaking into a sweat.

Anything else you want to tell us?
Beer is best!