Posted on March 18, 2010 by andyMogg in Breweries & Pubs, Hopdaemon No Comments

It’s Thursday, It’s lunchtime, It’s Meet The Brewer. This week we have Pete Brissenden from Hopdaemon. Pete is a top guy and he makes some great beers and for a skinny lad from down south he can certainly handle his beer, although there was one point during the aftermath of Twissup where his brain did go AWOL. So over to Pete for more about him… 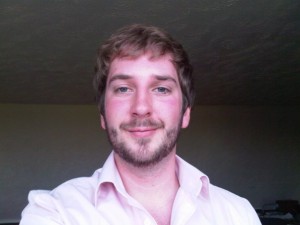 What is your brewery capacity?
12barrel

What is different about your brewery?
We brew traditional English style beers with a New World twist.

How long have you been brewing for?
About 7 months professionally.

How did you get into brewing?
Having left Uni is struggled to find a job. After much soul searching I sat down in front of the computer, pulled up a list on Google of all the breweries in Kent and begged to go and work for any of them for free. Hopdaemon happened to be looking fora brewer and the rest is history

What beers do you brew regularly?
Golden Braid is a 3.7% straw coloured hoppy session beer with a marmeladey hop character

Incubus is a 4% bronze coloured beer with a toffee malt body with hints of roast and smoke. It has a rich, ripe fruit hop character

What special/seasonal beers do you brew?Dominator is a 5.1% Bronze beer, that takes the Incubus flavours and turns them up to 11. Roast, smoke, sweet, fruity. Our Autumn/winter special. Cask only

Green Daemon is a 5% Helles Bier brewed with an interesting mix of hops from round the world to create a light bodied refreshing beer that smacks of tropical fruits like mango and papaya. Our summer cask special, available all year in bottles.

Leviathan is a 6% Rich, dark, roasty ruby red beer. With a complex peppery hop character and smooth malty finish. Only a few casks a year of this, usually for winter beer festivals. Available all year in bottles.

I think the rate of growth of microbreweries in this country is great but ultimately unsustainable. Although growing, the cask ale market is still a small one. I feel that the new microbrewers need to have some sort of unique selling point, be it a pub attached or that they make massively exclusive off the wall esoteric bottled beers, whatever. I think we are in danger of lots of small breweries making samey, brown, boring session bitter. 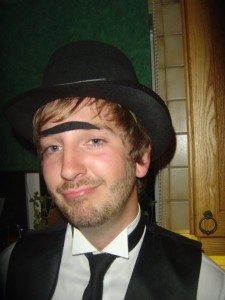 Sorry Pete, this picture just had to be used ;o)

Winning the Kent beer festival with Golden Braid last summer is probably up there.

Do you have any brewing regrets?
About a month after I started brewing, when I was still learning my way round the plant I accidentally flicked the 30kw element on the copper on rather than the hot liquor tank. The copper was empty and the element burnt out. Cost about £1000 to replace and a week’s brewing time lost. I was terrified I was going to get sacked.

What was last beer you drank?
Whitstable Oyster Stout with a lump of Dorset Blue Vinny cheese

What is your favourite hop?
Hard to say, possibly Challenger. Brilliantly versatile for both bittering and aroma.

What is your brewing ambition?
My own brewery, with a bar and restaurant selling beers and decent simple food.

A couple, my grandfather initially, when I was a kid got me interested in beer and winemaking and since then, probably my boss Tonie Prins. His beer recipes are works of genius.

Which beer do you wish you had brewed?
That is really tough, just one…

Marble Pint is up there as is Darkstar Hophead. Ask me next week and my answer will have changed!

Favourite hobby outside of brewing?

I’m a keen powerkiter and landboarder, but I also enjoy playing guitar and trawling secondhand record shops for vinyl.

Anything else you want to tell us?
Andy, it is your round! Mine is a Skrimshander please mate.

Thanks to Pete for taking the time out to fill this in, you can read my thoughts on his beers here, visit the Hopdaemon website here or follow Pete on twitter here.