Posted on August 19, 2010 by andyMogg in Amber Ales, Breweries & Pubs, Meet The Brewer No Comments

This week sees our Meet the Brewer compelted by the brewery who recently won Champion Speciality Beer of Britain 2010, its Pete from Amber Ales.

Where did your Brewery get it’s name?
Amber Ales Ltd, named after the Amber Valley region where we are located : it is literally the valley of the river Amber in central Derbyshire

What is different about your brewery?
We like to think of ourselves like Paul Smith : â€˜classic with a twist’. Understated, with top-notch crafted quality beers that often surprise with
something different. 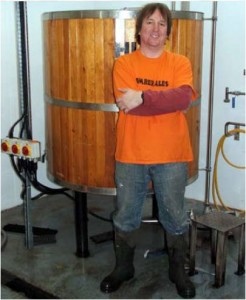 Pete looking as proud as punch!

How long have you been brewing for?
Nearly 4 years on a commercial scale

How did you get into brewing?
Well I trained as a chemical engineer, then worked in the paper industry for a while : the UK used to have a big paper manufacturing sector, less so now. The paper industry is like brewing, where it’s chemistry by the bucket rather than the test tube. Wellies not white coats. Got into homebrewing because I was so sick of bland corporate beers and real ale â€˜pond water’ – flavourless, sweet & mildly intoxicating at best.

Here I got interested in how to pack the flavours I wanted into beer. Then I left paper and went into business analysis & IT stuff but kept home-brewing. Eventually the long dark night of the soul came knocking and it was a case of â€œdo I want to have â€˜corporate manager’ on my gravestone? Do I want to drive a desk? No, I don’t want to do what I’m doing I want to make a difference; how can I combine
training, instinct, passion & hobby into career?â€ Well that’s brewing, obviously.

What beers do you brew regularly?
We have had the pleasant problem of having to add many one-off brews to our regular roster as they have been so popular, although it gets beyond a joke sometimes! We stared out with 3-4 regular beers and now, particularly since the opening of our 2nd pub, have 7 or 8 on the â€˜must stock’ list. These are:

What special/seasonal beers do you brew?
We do a number of seasonal brews, including:

On top of that we do a number of specials, one-offs and experiments (termed â€˜experiment-ales’ : if you want to try them they are usually on at the
Talbot Taphouse weekly on a every Thursday, or at the brewery for off-sales). Some from our recent past includeâ€¦

Where do you think the future of brewing lies?
It’s a clichÃ© but it has to be innovation. Keeping customers excited is the key, otherwise they all turn off and go back to bland regional and smooth brews. That’s not to say we all need to do new wacky stuff every day, just subtle changes can do it too.

What is your proudest moment in brewing?
My first brew commercial brew was done during paternity leave for my first child, hence on his birth certificate is says â€˜Occupation of Father :
Brewer’.

Alternatively, every time someone appreciates beer I have made. It’s out there with a little piece of my integrity, made as good as I can make it.
Every positive and negative comment is a possible dagger but you have to deal with it. Also, brewing beers different enough that everyone likes some of them, yet few like all of them : that’s how you know you’ve hit the styles right on.

Do you have any brewing regrets?
Should have started years ago when I was younger, fitterâ€¦ and slimmer! Then again, never trust a skinny brewer!

What is your brewing ambition?
Top notch best case for our beer, brewed and served perfectlyâ€¦ I’d give that 8 out of 10. At best.

My ambition is to brew and serve the perfect 10 out of 10. Probably will never happen and will drive us all mad in the meantime but hey, it’s my
ambition alone.

What was last beer you drank?
Of mine : a bottle of 12 month old Jasmine IPA, to see how it has aged; of others, Pretty Things Field Mouse Farewell acquired on a recent trip to
Boston USA

What is your favourite hop?
That’s like asking which is my favourite child; they’re all great in their own way, you just have to treat them right. Narrowed down to one it’s
probably Styrian Golding for its spicy versatility. No wait, Cascade’s floral citrus aromaâ€¦ or the minty, grassy Goldingâ€¦ d’oh!

Do you have a Brewing hero/inspiration?
Undoubtably Garrat Oliver, brewmaster with Brooklyn Brewery. Wrote the definitive book on beer & food matching (and on beer styles, incidentally), The Brewmaster’s Table, and still a feet-on-the-ground normal person. I’ve had the pleasure of meeting him several times and he is inspiration itself. Also great with the pithy one-liner; on budcoorsinbev lager: â€œif it doesn’t look like beer, and it doesn’t taste like beer, and it’s not made from what beer is made from, how can you call it beer?â€

Which beer do you wish you had brewed?
The very first export India Pale Ale, or maybe I’d be happy just tasting it

Favourite hobby outside of brewing
What would I do if I wasn’t brewing? Sleep maybe. Play with my kids. Going to the pub as a customer not as a critic. Or maybe play golf. Or homebrewâ€¦

If you could have one superpower what would it be?
Timewarping to turn 7 days into 8 for the week so I could have a day off occasionally.

Anything else you want to tell us?
The UK beer scene is really starting to happen for microbreweries. It is great to see so many small guys making exciting ales but we have a long way to go. There are still too many bad pints, insipid brews, dodgy breweries and unscrupulous landlords. We have to raise our game : so everytime you order a pint you can help – demand the best, a perfectly brewed and served pint and in doing so you will raise the bar. It is our challenge as brewers to meet it.