Posted on February 4, 2010 by andyMogg in Breweries & Pubs, Meet The Brewer, The Brew Company 1 Comment

It’s Thursday and that can only mean one thing…It’s time for Meet the Brewer, this week It’s Pete Robert’s from The Brew Company in Sheffield, I recently met Pete at Twissup and he is really passionate about his beer and has some interesting ideas and plans for the future so keep an eye on him.  His better half Liz (AKA Ginsoak) also sends me jars of her Pic-Ale-Chilli which is utterly fabulous and I hope it makes it on to their new pub menu so the whole world, well the whole of Sheffield, can try it. Anyway over to Pete:

What is different about your brewery?
Good question, in terms of beer range I suppose i do similar styles to most other brewers.  However all cask ale breweries produce individual beers with their own characters.  I pride myself on brewing well balanced flavourful ales and so far the awards are proving how good they are. That’s the whole point of being a craft brewery i am different to other breweries by my exsitence, by my passion and by my motivation. 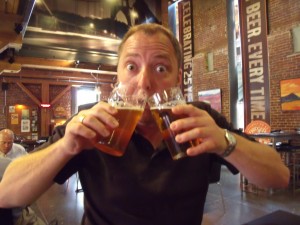 How long have you been brewing for?
2 years now, before i started the brewery i had never even home brewed before. Talk about a leap of faith!!

How did you get into brewing?
I took redundancy from Cadburys after 18 years and decided to try something totally different. Having spent a good 20 years sampling the stuff i thought it about time i tried to influence the brewing scene in Sheffield.

What beers do you brew regularly?
My range is quite fluid at the moment as I like experimenting so i am brewing many differerent one off specials which gives me the opportunity to play around with hops. The regular beers are Abyss Best Bitter 4.2%, Elixir Bitter 4%, Frontier IPA 4.7%, Hop Ripper IPA 4.3%, Slaker Pale Ale 3.8%, Brewers Gold 4%, Eclipse Porter 4.7%, St Petrus Stout 5%

Where do you think the future of brewing lies?
Local craft breweries brewing good honest cask ale for the pub market. Supermarkets will get their just desserts soon i am sure.  They way forward is to produce good ales which have a strong local link from a sustainable brewery that actually cares more about the flavour of their beer than the marketing of it.  I also believe the future has room for real keg beer.  By that i mean carbonated, chilled sterile filtered beer, not pasteurised. American craft beers really do show the way for the next generation of beer drinkers.

What is you proudest moment in brewing?
Taking the leap and doing it!Building the brewery myself and selling the first cask.  Oh, awards are nice too! And of course taking my own free house pub recently, The Harlequin,  A brewery and a pub! What recession?!

What was the last beer you drank?
Harlequin Blonde 4% – a light pale fruity Blonde ale (house beer at The Harlequin Inn, Sheffield)

What is your favourite hop?
Perle, fruity and light with good bitterness. Although i do love American hops such as Centennial and Chinook.

What is your brewing ambition?
To build a following organically, as people dicover us.  I hate mass marketing, and a couple of my own tied houses would be nice.

Do you have a Brewing hero/inspiration?
I admire people like Sam Calagoine of Dog Fish Head, because he kinda started the whole movement in extreme brewing for me. Way before the likes of BD started emulating them.  He was and still is original and seems to look to no one for inspiration which i think is amazing.  To the other end of the spectrum, Bull Lane Brewery in Sunderland, where 2 guys brew excellent beers just for their pub, The Clarendon, on a small 2.5BBL plant in the tiny cellar space.  Their passion for their trade was infectious and inspirational to me.

Which beer do you wish you had brewed?
Quite a few yet!  Imagine how many beers i have yet to brew.  Now you see my dilemma choosing just one.

What is your favourite hobby outside of brewing?
Drinking ale! I love to travel although these days i do end up going to brewing related places.  Last year was Portland Oregon and Belgium. See what i mean?

Anything else you want to tell us?
As far as beer is concerned all i can say is approach each beer with an open mind and you will find a new experience in every glass.

One comment on “Meet The Brewer: Pete Roberts – The Brew Company (Sheffield)”