Posted on October 1, 2013 by andyMogg in Meet The Brewer, Savour Beer No Comments 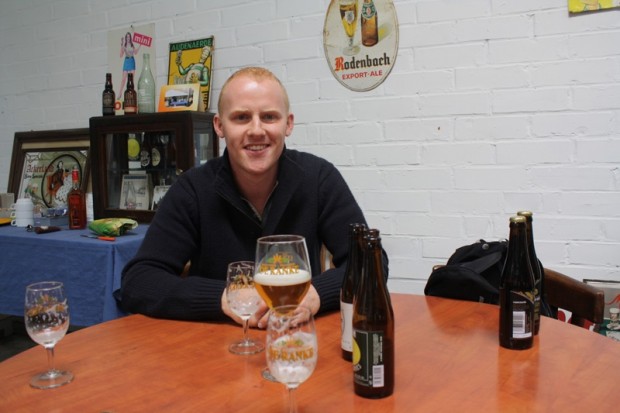 The company is called Savour Beer. I wanted the name to give a sense of my vision for the company and what we were all about. Whilst the UK still has a love affair with wine and spirits, beer is often treated like the unwanted sibling. The attitudes towards beer are beginning to change slowly but I still feel that beer is under respected. I believe that beer does deserve more respect and I chose a name that I felt best supports this belief.

Depends where we brew! We don’t have our own brewery at the moment and currently rent space at 2 breweries of different capacities. Between 5 and 10 BBL is probably the best answer.

Apart from the fact we don’t have one we focus on Belgian inspired beer styles and brewing techniques. My passion, love and inspiration for everything beer and brewing comes from Belgium and I felt the

Belgian styles were being neglected given that the majority of breweries in the UK at the moment focus on either traditional English or hop forward American styles.

I started home brewing around 3 years ago and then attended Brewlab at the end of 2011 which was great to get the science behind the whole process. I launched Savour in March 2013 so have been brewing commercially for about 6 months.

I went on a weekend trip to Ghent and I was just blown away with the diversity, quality and flavour of the beers out there. It was like nothing I had ever tasted before and so far removed from anything I had ever tried in the UK. I fell in love with the Belgian culture, attitude and perception towards beer and wanted to bring some of that to the UK. From there I was hooked.

We launched with the one beer (Progress) and are bringing out a Saison at the end of the month. A dark, spicy, Belgian inspired Christmas beer is on the cards towards the end of the year.

Good question and such a difficult one to answer! The traditional pub market is declining and the numbers of products entering it are increasing so it is only logical that something has to give. I’m very much a believer in the ‘differentiate or sell cheap’ methodology and so I think innovation and creativity will play a large part going forward. Route to market is becoming increasingly difficult as well so breweries that succeed here will unfortunately prevail rather than those with the best tasting beer.

All our beers are in bottle at the moment. Given the higher ABV’s I think they are better suited to bottle rather than draught. 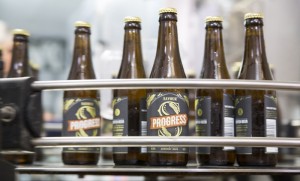 Getting our first beer to market and hearing the feedback! It took so long to get to that stage and with so many hurdles to overcome it was amazing hearing such positive reviews on something I had created.

Yes, plenty but they are all on the business side. Going into a venture like this on your own, with such a small amount of capital and even less experience is always fraught with risk. It’s unfortunate there are some nasty people out there looking to take advantage of you.

To have beer treated with the same reverence as wine and spirits in the UK. I would like every top restaurant to have a great beer list standing side by side with their wine lists. Why restaurant owners put so much emphasis on their wine lists only to present Peroni as their best beer offering is beyond me.

I was in Belgium last week so it was a 750ml bottle of Echt Kriekenbier from Brouwerij Verhaeghe. An absolute delight!

Rodenbach Grand Cru with eggs benedict. I had it for brunch when in Brugge a couple of years ago and it just blew me away!

I would have to say either Manu De Landtsheer from Malheur or Nino Bacelle from de Ranke. Manu for producing some of the most beautiful beers in the world and Nino for starting out in much the same way I have to becoming one of the most exciting brewers in Europe. They have both had such interesting journeys and their attitudes towards beer are infectious. I was lucky enough to meet both of them when in Belgium and visiting their breweries was hugely inspirational.

I’d love to collaborate with Urbain Couteau of De Struise and brew a Belgian Quad. I have a huge respect for Urbain and it also helps that Pannepot is one of my favourite beers!

If you could share a pint with someone dead or alive who would it be, what would be the beer and where would you have it?

Michael Jackson (the beer writer that is!) and I’d drink a Rochefort 10 whilst sitting in the café at the Abbey. In my early days of learning about beer and Belgian beers it was his reviews and TV series, The Beer Hunter, which really inspired me. I have huge admiration for what he did and gave to the beer world.

Rochefort 10. This was the drink that changed my perception of beer forever.

I try and spend time with family and friends. Starting up a business is a very time consuming exercise and anything that can take my mind off the business is a good thing! I play guitar and do the odd bit of cycling when time permits which is great for letting off steam.

The ability to multi task very, very well (if that even is a superpower?)