This week our Meet the Brewer, features Stephen Burton from Green Room Ales, I first came across Green Room Ales on Facebook, I was pretty impressed by their branding and loved the sound of their ales so thought I would ask them to take part in our feature. So over to Stephen for more about them. 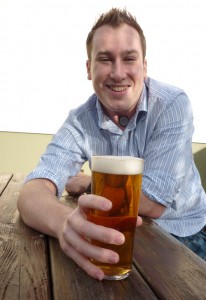 At the moment we work on a 10 barrel plant.

What is different about your brewery?
It’s probably been said by every new brewery but we really do want to try and push the boundaries of brewing!  I have so many different ideas and plans for brews that are both traditional with modern twists and totally innovative and new.

How long have you been brewing for?
We set up the firm just under a year ago but only over the last few months have we started more regular brews.

How did you get into brewing?
In 2008 I was diagnosed with a rare form of throat cancer, which meant I had to undergo major surgery (Laryngectomy) leaving me effectively with a whole in my neck.  While recovering from the operation I had a beer from a local brewery and thought that ‘I could do it better’.  From there I started looking into it and it all went from there.

What beers do you brew regularly?
Our first beer Green Room IPA (4%) we’ve been brewing since we started in 2009.  We’ve recently launched two new beers which we want to brew regularly, Icon (4%) and Rogue (7.6%).

What special/seasonal beers do you brew?
Nothing at the moment but we have plans to introduce at least two seasonal beers a year, our first one will be brewed for the Autumn this year.

Where do you think the future of brewing lies?
Brewing can only get bigger and better.  It’s great to see more micros setting up and people enjoying new and different beers.  We want to produce some really ground breaking beer and I know a few other breweries out there are doing the same.  As more people become aware of great beer I think we’ll see even more breweries trying different things.  Innovation is the future of brewing. 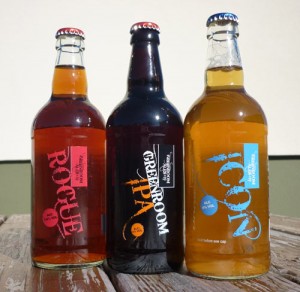 My proudest moment so far was when we did our first batch of Rogue, our latest beer which is also our strongest beer at 7.6%!  Even better it still tastes like a beer! Just don’t think about how much duties you pay on a brew :-).  I want to produce enjoyably drinkable beers and even though its strong, Rogue is still a drinkable beer but with an added bite!

Do you have any brewing regrets?
Only that I didn’t get involved in the industry sooner.  The great thing with beer is that people love to brew it, drink it or both, how many lines of work have a big following like beer?

What was last beer you drank?
It was St Austell’s ‘Proper Job’ or it might of been their ‘Tribute’, it was a wedding reception so the night does blurr a bit 🙂

What is your favorite hop?
It’s got to be my first love: Cascade, used in our Green Room IPA

What is your brewing ambition?
Long term I want to open a brew pub down here in Cornwall.  I love the idea of people drinking the beer and also watching it getting brewed.  If you could get the concept right it would have a great atmosphere and be a great place to drink with some great beer.

Do you have a Brewing hero/inspiration?
I like the fact that the US has jumped straight into brewing relatively recently with a ‘give it a go’ attitude.  There are some really great craft breweries over there that produce some lovely beers.

Which beer do you wish you had brewed?
I tried Saltaire’s Raspberry Blonde at a local beer festival a few weeks ago and loved it!  Hit with the strongest berry’s ever, like being a big kid and having Ribena.  So much so we’ve been playing with a raspberry beer already.

Favorite hobby outside of brewing?
I used to like diving, but I’m unable to do it anymore due to my throat operation.

Anything else you want to tell us?
We’ve got loads of ideas for some really exciting beers including a secret brew which we hope to launch in time for Easter.