Posted on July 1, 2010 by andyMogg in Badger, Breweries & Pubs, Hall and Woodhouse, Meet The Brewer No Comments

What is different about your brewery?
We have been brewing since 1777, whilst the existing brewery was built in 1899. We only supply draught beers (cask & keg) to our own pubs of which H&W owns 250. The Chairman (Mark Woodhouse) has a team of auditors whose sole responsibility is auditing the quality of beer in our pubs and ensuring the beer in our pubs is of the highest possible quality. 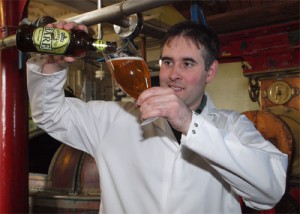 We have a range of 16 different beers in bottle to cover all tastes. We have 2 double World Champions in our stable (Tanglefoot and First Gold) and have won more Tesco Beer Challenges than any other brewery

How long have you been brewing for?
The brewery since 1777. Personally brewing full time as a profession for 13 years.

How did you get into brewing?
I did a brewing degree at Heriot Watt. Whilst I was at Uni I went to work for a micro brewery in Florida called the Williamsville Brewing Co. I finished my degree and gained the award for the 1997 Brewing Student of the Year. I joined Bass and worked in 4 of their breweries and Maltings before joing H&W in 2006. 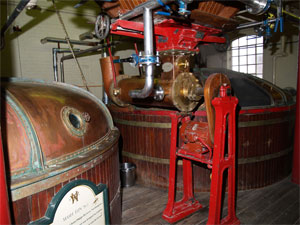 Where do you think the future of brewing lies?
Ales have seen a resurgence in the last couple of years. It is important that the brewers priority is ensuring he provides the highest quality products he can. The market is still seeing a trend towards bottle and can and away from the pubs. To survive it is important that any brewer considers how he can cover this route to market.

What is you proudest moment in brewing?
Becoming Head Brewer at Hall & Woodhouse

Do you have any brewing regrets?
No

What is your brewing ambition?
To build a new brewery for H&W and continue to drive the quality and success of the Beer Company at H&W

What was last beer you drank?
Badger First Gold

What is your favourite hop?
I have recently been doing some trials with Cascade, which gets a depth of aroma that is quite mouth watering. Although it is important to blend it appropriately to ensure that it is not overpowering.

Do you have a Brewing hero/inspiration?
Stuart Noble (brewer Noble to his colleagues and friends). A man of technical brilliance and principal with an abundance of common sense.

Which beer do you wish you had brewed?
I am quite happy with the stable I have got

Favourite hobby outside of brewing
Spending time with my wife and 2 year old son. Followed by working my dog.

Anything else you want to tell us?
Being a brewer is not a job it is vocation