Posted on May 5, 2011 by andyMogg in Meet The Brewer, Saltaire Brewery 3 Comments

This week’s meet the brewer comes from Tony and Saltaire, I’m a big fan of Saltaire brewery and have been drinking them since at Uni just down the road in Bradford, they do some really interesting beers so if you see them they are definitely worth trying.

What is your Brewery name and where did it come from?
We were originally going to set up in the World Heritage site in Salts Mill, Saltaire. We got the branding done, but then found more suitable premises a mile away to Shipley. We loved the brand – so we kept it!! 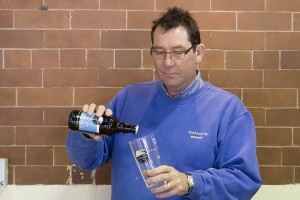 What is different about your brewery?
Although our best selling beer is Saltaire Blonde 4%, we are really well known for our flavoured specials, especially Triple Chocoholic 4.8% and Hazelnut Coffee Porter 4.6%, both national and international award winners.

How long have you been brewing for?
Been a home brewer all my life, commercial brewer for 6 years.

How did you get into brewing?
Retired from a legal career, exhausted and fed up and looked for a new challenge. The idea of taking a product right from creation through to market really appealed to me and my love of brewing seemed to point in only one direction!!

What beers do you brew regularly?
Our standards are Saltaire Blonde and Cascade Pale Ale. We have about 12 regular beers that ‘come and go’ throughout the year.

What special/seasonal beers do you brew?
List is pretty huge, but apart from the specials mentioned above we brew/blend a range of flavoured fruity beer, Raspberry Blonde, Elderflower Blonde, Blackberry Cascade and Cheeky Kriek. At Christmas we do a wit beer with orange peel and coriander seeds. I always look forward to doing that one.

Where do you think the future of brewing lies?
Cask ale is looking in good shape, but I think in 10years time we will see a huge increase in quality craft keg beers. In the U.S. this enable a large range of restaurants, hotels and clubs to stock a big range of local, tasty brews. It just isn’t feasible to do this with cask. It will need a sea change in attitudes, particularly amongst the CAMRA establishment. I also think the take home sector will increase in size for craft brewers as a new generation becomes more switched on to the great taste of well brewed beer in bottles.

Do you bottle/keg/cask your beer?
We bottle Cascade, Blonde, Raspberry Blonde, Triple Chocoholic and Hazelnut Coffee Porter. We have a big commitment to growing our bottled beer sales. We don’t keg, but looking to the future believe it will happen. 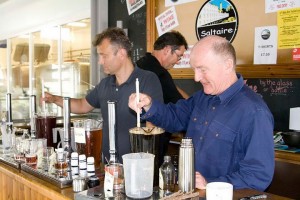 Oz Clarke and Hugh mix beers while tony lurks in the background.

What is you proudest moment in brewing?
Probably Winning the SIBA Supreme National Championships in 2010 with Triple Chocoholic. Although, sharing a pint of my first commercial brew in a local with my Dad was pretty cool too!!

Do you have any brewing regrets?
We book our brewing slots up weeks in advance to balance demand for different products, bottling etc – each year I promise myself I will make time to brew a Barley Wine for Christmas – I have never had the chance.

What is your brewing ambition?
To get the capacity and space to produce a small range of radical beers which would really allow me to express myself as a brewer.

What was last beer you drank?
A bottle of great home brewed IPA, which I swapped at the Brewery for a pint of Saltaire Blonde, when we hosted a visit from the Northern Craft Brewers Association. Home brewers never cease to amaze me with the quality of their brews and sense of innovation.

What is your favourite hop and why?
I love the piny, resinous aroma and flavour of the Cascade hop. I also love its versatility. It works in stouts, IPA’s, amber and brown ales. There is nothing to match it as a mid alpha bittering and aroma hop.

What is your favourite beer/food combo?
I love a Lees Harvest Ale (a barley wine) with a good French cheese board. Sweetness of the ale works with the sweetness of the cheese.

Do you have a Brewing hero/inspiration?
I think Charlie Papazian, the American home brewer/author, who lead the home brewing revolution in the States. Get any of his books from Amazon. They are a great read and also will teach you a lot about beer.

If you could brew one collaboration beer with someone who would it be with and what would it be?
I would like to brew an enormous Black IPA with Sam Calagione from Dogfish Head Brewery, Delaware. I love his beers and his radical approach to life, brewing and business. I am too much of chicken to follow his lead or perhaps his style would only work in America?

Which beer do you wish you had brewed?
1872 Porter from Elland. Dave Sanders got this recipe absolutely right and I am glad to see Gordon at Elland has continued his good work. Beer is a question of balance and this beer gets the malt and hop flavours right on the mark. The depth and strength of flavour really appeals to me and many others! We need to see this in a bottle!

How do you spend your time when you aren’t brewing?
I am a big cycling fan and love taking my mountain bike off road around West Yorkshire. Amongst other long distance rides, I have completed the Coast to Coast five times. I am an avid reader of both fiction and non- fiction and have recently ditched my Kindle to return to the joy of the touch and feel of real paper books!

If you could have one superhero superpower what would it be?
A super powerful and intelligent ‘nose’; often smell tells you so much more than taste!

Big thanks to Tony for filling this in, you can check out the Saltaire website for latest news of what they are up to.