Posted on April 1, 2010 by andyMogg in Breweries & Pubs, Fyne Ales, Meet The Brewer No Comments

This week’s meet the brewer comes from way north of the border, Wil Wood from Fyne Ales took time out from brewing 5 times a week to complete our little questionnaire. Fyne Ales make some fine ales (see what I did there??)  I’m quite partial to their Avalanche.  So over to Wil to fill you in… 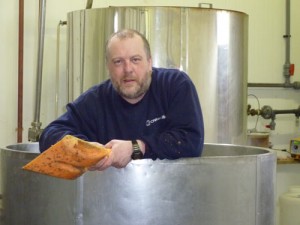 What is your brewery capacity?
A ten barrel plant currently brewing 5 times a week

What is different about your brewery?
Everyone who works here is mental!

How long have you been brewing for?
I started home brewing in the mid eighties and commercially in the mid nineties with Oakham Ales. I had always wanted to move to Scotland so I took the job as head brewer for Fyne Ales in 2006

How did you get into brewing?
By turning up at Oakham at 4 in the morning and helping John Bryan (their head brewer) until he gave me a job

Where do you think the future of brewing lies?
Hopefully with breweries that brew distinctive, flavorsome beers.

What is you proudest moment in brewing?
I had an incredible run of awards as second brewer for Oakham Ale for nine years. Runner up CBOB 1999 & winners in 2001 were mind blowing achievements. However brewing Avalanche for Fyne Ales (primarily as the beer I wanted to drink) and then see it win several awards including Worlds Best Golden Pale Ale 2008 at the World Beer Awards and became the top selling Fyne Ale within 2 years, is also up there. 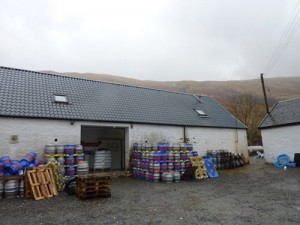 What was last beer you drank?
Hurricane Jack, the second beer I’ve brewed at Fyne Ales for me to drink since I’ve been here!

What is your favourite hop?
My all time favourites are Cascade & Liberty but I also have a soft spot for Amarillo and am looking forward to experimenting with Citra, the latest new hop from the USA.

What is your brewing ambition?
To brew distinctive flavoursome beers that other people like to drink.

Do you have a Brewing hero/inspiration?
That would have to be John Wood, the original brewer who set up Oakham and introduced us to American Hops. A man who can name the hops in your new brew by tasting it!  Roosters and Kelham Island are up there too.

Which beer do you wish you had brewed?
Summer Lightning, Palerider, Bishop’s Farewell.

Favourite hobby outside of brewing?
I love my motorbike, hill walking, reading and drinking beer

Anything else you want to tell us?
Look out for our 3 new beers this summer and put the 19th June in your diary because that’s the date of our Beer Festival!