Posted on December 8, 2011 by andyMogg in Meet The Brewer, Revolutions Brewing Company No Comments 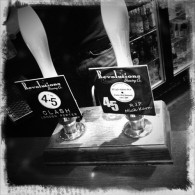 What is your Brewery name and where did it come from?
We are the Revolutions Brewing Company. The name is a reference to the revolutions of vinyl record-playing turntables. Before CDs and digital downloads music used to revolve at 33 and 45 rpm — and for those with longer memories, 78 rpm.  Until the high level beer duty introduction in October-11 our beers were brewed to reflect these speeds — 3.3%, 4.5% and 7.8%.  We still make 3.3% and 4.5% beers but the 7.8%s are on the back-burner until the fallout of the High Strength Beer Duty settles. 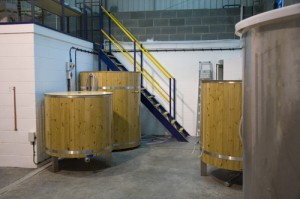 What is your brewery capacity?
8BBL

What is different about your brewery?
We’ve developed a theme for our beers that is resonating with a portion of the beer drinking market. Furthermore with the recipes of our core range we’re aiming to be a little different from much of what is out there. That’s all you can hope to do in a competitive market — you can’t be all things to all people and you have to seek to stand out in some way whether it’s through branding/theme and/or beer styles/recipes.

Within our core range we’ve fused beer styles and created beers that are a clash of styles. There seemed little point to us in trying to clone other well-established beers — after all, those beers are great, so why try and make our own version of them?

How long have you been brewing for?
Just over a year.  Initially cuckoo brewing then from our permanent home near Castleford, West Yorkshire since July-11.

How did you get into brewing?
Andrew: I had been brewing at home for 20+ years and full-mash home-brewing for 5-6 years.  I went on the BrewLab course in Sunderland in 2007 and bided my time waiting for the moment/opportunity/inspiration to hit me, which it did in the summer of 2010.

Mark: A deep appreciation of the end-product!

We have a core range comprising the following:

Clash London Porter 4.5% – a traditional dark porter with a complex malt profile and finished with US hops — a ‘clash’ of styles 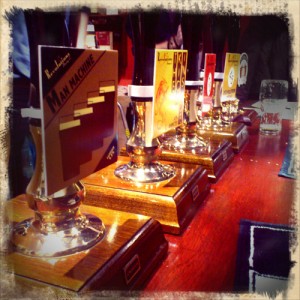 Kraftwerk Braun 4.5% – another clash of styles this time a hybrid of an English bitter and a German brown ale — essentially an English malt backbone finished with noble German hops

Beat Red 4.5% — the latest addition to our core range – a red ale with a big floral/citrus hop finish

What special/seasonal beers do you brew?
Every month we brew a special under the banner of our Rewind 33 series. This commemorates a classic album or single release from 33 years ago.  Next year we celebrate the fantastic year for music that was 1979 — we’ve already lined up the brew schedule and are very excited about what’s in store!

Additionally, we have some exciting plans for 2012 that should see us brewing some other, occasional beers of interesting styles and perhaps different strengths.

Where do you think the future of brewing lies?
Markets are always cyclical. Big brewers become bigger and ultimately alienate their customers which allows smaller producers to enter the market and appeal to drinkers in their own way. If the pub co’s can be broken up and the distortions removed from the market (e.g. Relative price of beer in pub vs supermarket) then there will be even more opportunities for smaller brewers to supply their local pubs.

Micro-brewers will become more engaged with keg as it opens up new market opportunities, particularly in venues that perhaps do not have the skill, or throughput to handle cask beer. This will not be to the detriment of cask as we don’t see micros substituting keg for cask, rather they will add it to their portfolio.

New hops will continue to come onto the market making for greater variety in beer tastes and aromas. It’s this surge in strongly flavoured and scented hops that we believe has turned beer into a topic of conversation. It’s now possible to discuss beer in the way that wine is talked about. Beer has become cool and dare one say it, sophisticated.

There are many opportunities for innovative brewers to capture the hearts, minds and palates of drinkers.

Do you bottle/keg/cask your beer?
Not yet but watch this space. We have a few products in mind for bottling and are actively considering kegging at some point in the future.

Very simply we have a feeling of pride every time a customer re-orders one of our core beers.

Do you have any brewing regrets?
Regrets are wasted energy. It might have been beneficial to have had the wherewithal to have started about 3-4 years ago, as the micro-brewery market is considerably more crowded now than it was in 2007, but we both feel that had we begun a few years ago we wouldn’t have had the theme or the development plans we now have in place. 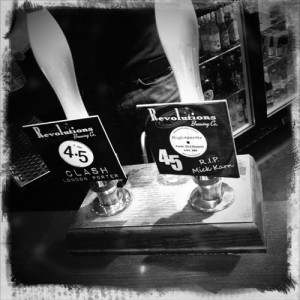 What is your brewing ambition?
Do we want to develop the products and the brand to a point where we could sell it for multi-millions like a certain Cornish brewer? Maybe! But really it’s about growth, innovation and continuous improvement. We strive to provide drinkers with a pleasurable product and, from our side, have a bit of fun with the music angle along the way.

What was last beer you drank?
Andrew: Marble ‘Chocolate Marble’

What is your favourite hop and why?
We both love Summit which is a high alpha US hop. We used it as a single hop in our Kick Inside special and it’s part of the recipe in Beat Red.

Andrew: a Bavarian dunkles and some kind of pork-based product!

Mark: I don’t have a particular favourite – though a chef of our acquaintance plans to marinade a steak with Propaganda, our 7.8% Imperial Stout – I’ll definitely have some of that!

Do you have a Brewing hero/inspiration?
We were inspired by the combination of great beer and strong branding of breweries such as Dark Star, Thornbridge, Marble, Summer Wine and more recently Magic Rock.

Equally, we appreciate the skill and effort applied by some of the smaller, less well known brewers we meet. All heroes in their own right.

If you could brew one collaboration beer with someone who would it be with
and what would it be?
We’re actually planning a couple of exciting collaborations next year with  great brewers so keep your eyes on our social media channels for more information.

Which beer do you wish you had brewed?
Andrew: Acorn Gorlovka

Mark: Gorlovka is a good answer, splendid beer. But I’d love to have brewed My Antonia, a collaboration between Dogfish Head and Birra del Borgo, that was a memorable beer.

How do you spend your time when you aren’t brewing?
Andrew: Listening to music and going to gigs. Occasional walks/hikes.

If you could have one superhero superpower what would it be?
Andrew: Absolutely no idea!

Mark: Warnie’s flipper would come in handy, as would the ability to dig out a mash tun with a flick of a finger.