Posted on March 14, 2011 by andyMogg in Meet The Home Brewer 2 Comments

In the first of a new series on Beer Reviews we meet the Home Brewer, just like the Meet the Brewer but with Home Brewers…..simple really.

First up is Adrian or pdtnc as those of you on twitter will know him.

Does your home brewery have a name? if so what’s the story behind it?
If it does have a name, it would be ‘Cobblers’ as my granddad was a Cobbler and we live in his old house… though most things go by the online pseudonym of pdtnc. 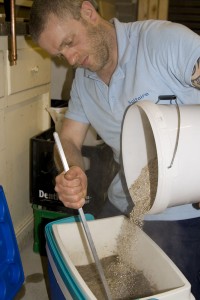 How long have you been home brewing brewing for?
My first All-Grain home brew was bottled on the 10th July ’09 and I started out on kits then extract about 6 months earlier.

How did you get into home brewing?
My girlfriend (now very understanding wife) bought me a starter kit for my birthday after I’d been tinkering with supermarket fruit juice wines.

Have you or would you consider going professional?
I currently work at Saltaire Brewery and have done since January 2010, from cask washing right through to the brewday procedure its nice and varied and is keeping me suitably entertained.

Have you entered any home brewing competitions? how did you do?
I Entered my first one last year, I won the Strong Ale class at the National Craft Brewers Association Competition 2010 with my Cascade/Centennial/Nelson Sauvin hopped pale (read about it here)

What’s your favourite bit of home brew kit?
Currently probably my Refractometer as it gives me quick and easy reassurance that my Mash run-off is good. Overall it would have to be my home made temperature controlled HLT

What advice would you give to people thinking of starting home brewing?
Read up on internet forums, maybe read a Graham Wheeler book, do it… its easier than it sounds.

What are your top online/printed home brewing resources?
www.jimsbeerkit.co.uk the forum is a mine of information, although I do read books I find I only glean snippets of useful information. Using forums and seeing other peoples brewdays in pictures and on Youtube is far more beneficial than books.

What was last beer you drank?
Currently my Liquorice Stout

What is your favourite hop and why?
No particular favourite, though Nelson Sauvin are good, I believe in experimentation and trying to create new flavour experiences in my beers.

How often and how much do you brew?
Sometimes its been as much as once a week, then I find I’m getting too much bottle stock so I lay off for a while. The amount I brew varies with a maximum of 23 Litres and a minimum of 12 Litres, 12-15l is a good length for trying ideas out.

What beers have you brewed?
All the British styles, a couple of Belgians, and a kind of German style wheat beer.

What’s the craziest beer you’ve brewed or plan to brew?
Two choices here, 1. The brewday I did with Rob (to show him how to brew) which was a cracker even if we were a little drunk and forgot the copper fining’s / had to re-boil / add fining’s / add more hops / drink more beer!  2. My Imperial Amarillo Wheat which had over half a kilo of Amarillo hops in it over a 23 litre brew! Also a brilliant beer.

What is your favourite beer/food combo?
Nothing in particular. I wouldn’t want to get crumbs in my pint!

Do you have a Brewing hero/inspiration?
Currently www.thekernelbrewery.co.uk] the entire ethic of what I’ve seen and emailed Evin about is right up my street. Some brilliant beers without compromise.

If you could brew invite one pro brewer to brew a collaboration beer with you at home who would it be and why?No one in particular, I would be happy to see how any other brewer works / brews as there is always something new to learn.