Posted on March 30, 2011 by andyMogg in Beer Stuff, Meet The Home Brewer 5 Comments

Does your homebrewery have a name?
If so what’s the story behind it? The South Street Shed Brewery. When I took up the hobby again the condition was that I didn’t do it in the house. South Street is the name of the road I live in.

How long have you been home brewing brewing for?
This time round, two years. 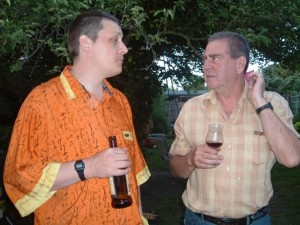 How did you get into home brewing? Mainly through poverty, I generally spent about £20 a week on bottled beer from Tesco and hardly ever visited pubs, I’d brewed before in my teens so I knew it was cheap, it was just a question of whether or not the kits had improved, and they have. I brewed kit beer and tweaked them for about a year then I built my own all grain plant this time last year and did my first all grain brew in May last year.

Have you or would you consider going professional?
I always used to say no to this one; partly because it is my hobby, partly because I’m not that sure there’s much money in it but mainly because micro brewing relies so heavily on Progressive Beer Duty and I don’t trust the government not to tinker with it. You’ve also got to remember that micros are mushrooming at the moment; the number in Kent has more or less doubled in the last 2 years which means much more competition so your beer has to have something to set it aside from the crowd. Having said all that, if an opportunity to develop a brewpub in the right location came up I’d be a mug not to consider it.

Have you entered any home brewing competitions?
How did you do? Nearly every beer I’ve ever brewed with a view to entering it into a competition has, sadly, had something wrong with it. The only one I got right was the porter competition judged by the Ramsgate Brewery but it was beaten by a truly stunning beer from a home brewer who has my absolute respect. I took the same beer along to the shoot for the Oz and Hugh programme that was aired at Christmas; they really liked it and asked me to brew another batch for their finale but there was an administrative cock up and it never got featured.

What’s your favourite bit of home brew kit?
I’ve made most of my kit myself which is always enjoyable especially as I’m no DIY’er. Probably I’d have to say my wort pump which pumps the wort from the collecting vessel to the copper (my brewery doesn’t have enough headroom to operate a gravity fed system) but I’m also very keen on my Hot Liquor Tank and sparge arm. 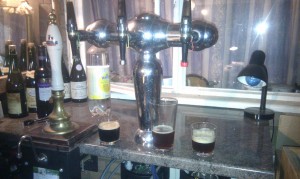 What advice would you give to people thinking of starting home brewing?
Stop thinking about it and get on with it. Start with kits and build up from there. If you are starting with kits, brew the second one as soon as you have an empty fermenter and build up a rolling stock, because although you can drink the beer after 3 weeks conditioning it will taste better after 6-8 weeks, just when you’re finishing the barrel.

What are your top online/printed home brewing resources?
The HomeBrew Forum, Jims Beer Kit and Brew it Yourself forums are invaluable to me but increasingly I ask the brewers on Twitter as the responses are usually in real time. I’ve also got Randy Mosher’s Radical Brewing but I’m more of an online man tbh.

What was last beer you drank?
I had a glass of Whispering Bob, an American Pale Ale 7%-ish and dry hopped to insanity and back.

What is your favourite hop and why?
It’d have to be Amarillo, mainly because it is so versatile. The first beer I brewed was an Amarillo Pale Ale (my mate Drew the Brew calls it Tony Christie IPA). It’s got a nice bitterness without being too harsh and the aroma is to die for which makes it perfect for dry hopping.

How often and how much do you brew?
Because I made a 10 gal homebrew rig I only have to brew about once a month. I’ve recently been persuaded by Pete Brissenden of Lovibonds to embrace Parti-Gyle brewing to enable to try different hop and yeast combos from the same malt base. The last one was a strong beer based on Whispering Bob but with a T-58 yeast and a small beer (which actually came out at 1048) with Sorachi and Citra but brewed with a US-05.

What beers have you brewed?
Dogbolter (Ramsgate Brewery), St Petersburg (Thornbridge), Brentwood Best (Brentwood) are the three from named breweries the others I’ve largely made from my own recipes. Amarillo Pale, American Pale, Smoked Porter, Green Bullet pale, Oatmeal Stout and so on.

What’s the craziest beer you’ve brewed or plan to brew?
I’m not sure it’s especially crazy but I’ve got a plan to brew an imperial stout to about 10% abv and then toast some oak chips in the oven, add some bourbon, condition, bottle and then age for a minimum of 6 months. 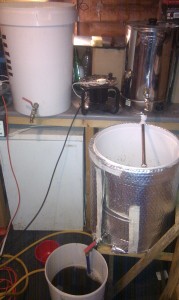 What is your favourite beer/food combo?
Yes, chilli con carne with mild. Dunno why but they work perfectly.

Do you have a Brewing hero/inspiration?
I have several; Eddie Gadd (Ramsgate Brewery) helped me loads when I was starting out. Evin O’Riordan (Kernel) has also been very approachable and really good to talk to. He’s taken my taste buds to another level with his single hopped pale ales and London style dark beers. Pete Brissenden (Lovibonds) actually went to the same school as my eldest son. Pete epitomises craft brewing for me; he works for a brewery that makes exceptional beer, he does triple brewdays, gets up at stupid o’clock to sit in traffic on the M25. The enthusiasm just shines through with him. You could also say the same about Kelly Ryan (ex Thornbridge now Epic Beer NZ), even though we have never met he is so easy to talk to. What I like about all four of these is that it’s all about the beer and not about European working time directives or not making a beer because it’s got too many hops in it or it’s too strong. Of course, I would think that because the thing about home brew is that you don’t have to sell it so you can make it as commercially unviable as you like.

If you could invite one pro brewer to brew a collaboration beer with you at home who would it be and why?
It would have to be Kelly, cos apart from anything else, it would be an excellent excuse to get him back to the UK.

Do you have a website/twitter/blog?
Yes I am on twitter @seanayling and my blog is brewingshed.blogspot.com

Anything else you want to tell us?
Yes, you need to rephrase that last question. It sounds like a detective question and my legal advice is to keep schtum!