Posted on March 21, 2011 by andyMogg in Meet The Home Brewer 2 Comments

Next up in meet our meet the home brewer series is Tom Fozard or cheeeseboiger as he’s known on twitter.

Does your home-brewery have a name? If so, what’s the story behind it?
No, not really. There’s a loose theme to do with the names of the beers I’ve brewed, with most of them having a connection to the bands and music I enjoy listening to. Perhaps I should take the time one day to give it a name. 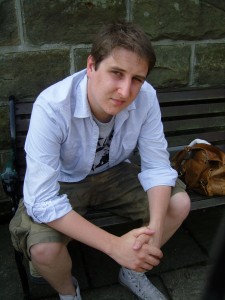 How long have you been home-brewing for?
Coming up to two years. I started extract brewing around the time of my 27th birthday and moved on to full mash just over a year ago.

How did you get into home-brewing?
Although my brother’s been brewing on a commercial level for over ten years, I’d never really thought about giving it ago until one day I got to thinking whether I could replicate the beer I enjoy drinking in the pub. My old man bought me a boiler for my birthday and I haven’t looked back.

Have you or would you consider going professional?
Myself and a friend had plans to start our own micro-brewery last year, but ultimately failed when it came down to finances (amongst other things). In hindsight, I didn’t know half of what I do now about brewing and the industry, so perhaps it wasn’t a bad thing that we didn’t succeed, as (especially in Yorkshire) it’s quite a crowded market. It’s definitely the industry I’d like to forge a career in though.

Have you entered any home-brewing competitions? How did you do?
I’ve not really looked into entering any competitions for my beer, although I have recently entered some of the labels I’ve designed for my bottles into a competition in the States. Whether they accept entries from this side of the pond is another thing. Time will tell how I get on with that, I guess.

What’s your favourite bit of home brew kit?
Probably the hop strainer. I love to cram a huge amount of hops into some of my beers – almost half a kilo per 25 litre batch with one particular recipe I devised : so this bit of kit comes in handy.

What advice would you give to people thinking of staring home-brewing?
Do it! Take the plunge and give it a go. You’d be amazed with what you can produce.

What are your top online/printed home-brewing resources?
Hopville.com‘s the one I use for creating my recipes and I also keep a copy of Randy Mosher’s Radical Brewing close at hand.

What was last beer you drank?
Marble’s Utility Special was the last commercially produced beer I’ve had. Pretty good it was too! I was fortunate enough to get a tiny taster of Buxton’s Axe Edge double IPA recently too, which was nothing short of amazing.

What is your favourite hop and why?
Probably Simcoe. I love the lemony aroma it can create, whilst it’s also a bit of a brute when it comes to bitterness. A special mention should go out to Chinook, Amarillo, Riwaka, Nelson Sauvin, Citra, Pacific Gem and Cascade too.

How often and how much do you brew?
I brew 25 litres at a time and brew anything from once a month to twice a week, depending on how much storage space I have.

What beers have you brewed?
My latest brew is a 9.2% imperial stout, but that won’t be ready in the bottle for a good few months yet. Other than that, off the top of my head, I’ve brewed countless IPA’s, an American Pale Ale, a black IPA, a liquorice stout and a couple of porters. 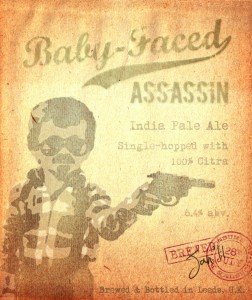 What’s the craziest beer you’ve brewed or plan to brew?
My Baby-Faced Assassin IPA. I was struggling to achieve really big aromas with my paler beers, so put together a recipe that used 400g of Citra (as well as an extra 50g for dry-hopping) in a 25-litre brew. Most people baulk when they hear the quantity I used, but the feedback I’ve received from those who’ve tried it has been pretty amazing.

What is your favourite beer/food combo?
I’m a fiend for extra mature Cheddar cheese. Pair it with beer, pretty much any style of beer, and I’d die a happy man (with high cholesterol and liver disease, no doubt.)

Do you have a Brewing hero/inspiration?
No heroes as such. I love Dark Star Brewing Co. My in-laws live in the village where they used to brew before up-scaling last year. I used to pop down to their cowshed brewery to buy beer direct from the source – sold in plastic, eight-pint milk cartons. Their marketing and pump clip designs are also rather good.

If you could invite one pro brewer to brew a collaboration beer with you at home who would it be and why?
I recently did a Pro-Am collaboration brew with my brother, but if I could choose anyone, it’d probably be a guy called Mike Hall who I met recently. Mike’s responsible for the Jolly Pumpkin franchise in the States (amongst other breweries) and also had a hand in helping to show Sam Calagione the ropes of brewing on a commercial scale back in the 1990’s. I reckon I could learn a hell of a lot from him, although it’d be a bit weird being cooped up together in my bathroom (where I brew) for the day.

Do you have a website/twitter/blog?
Yeah, you can find me here www.twitter.com/cheeeseboiger

Anything else you want to tell us?
The designing of the labels I put on my bottles is just as much a hobby for me as brewing the beer. There’s a real satisfaction I get from giving a bottle that’s got my beer in it to someone, with a label I’ve designed wrapped around the outside.