Posted on February 21, 2010 by andyMogg in Meet The Publican No Comments

This is the first a a new series called meet the publican where we grill a publican in the hope that we learn something new about them and their pub. This edition is Liz Aspden.

What is the name of your pub and where is it?
The Harlequin, Sheffield. We’re part of Sheffield’s (in)famous valley of beer – known for pubs that keep their beers well, and stock a good range of rotating guest beers.

What sort of community/clientÃ¨le does your pub serve?
It varies – we have a core of regulars who live and work nearby who come to see us everyday. The pub is also frequented regularly in the daytime by the ticking crowd who travel to Sheffield in search of new beers (and a good sandwich or two!). And then there’s the music crowd who come down for the gigs on Thursday and Saturday nights. 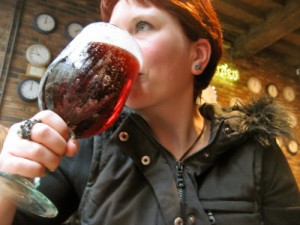 Liz from the Harlequin

What made you want to become a publican?
Can I plead temporary insanity? It’s been something that’s been at the back of my mind since I first started frequenting pubs – there’s always been something intriguing about the lifestyle for me. When I first met my better (?!) half (Mr @The_Brew_Co) several years ago, we were both in fairly average jobs and considered packing it in to start on a pub management scheme with a large company. Circumstances changed, and we put such crazy thoughts to the back of our minds until Pete started The Brew Company – I was increasingly dissatisfied with my previous career, and found myself plotting ways of making the switch.

How long have you been a publican?
I don’t officially start until 1st March, so not very long at all! But I’ve been training at the pub for the past 6 weeks, shadowing people and generally getting in the way while getting to grips with what needs to be done.

What facilities does your pub have?
Beer, and lots of it! We also do food during the daytime (good standard pub grub, and we’re expanding what we do to include a premium range of meals cooked with beer and cider as well as Sunday Roasts) and have a large function room available for private meetings or parties. Free wi-fi is something we’re exploring at the moment too.

What makes your pub different?
That’s a tricksy one – I do think that our success is in part due to our similarities with other great pubs in the area, ie, a great range of well kept ales served in welcoming surroundings. I’m looking forward to trying out some new ideas too (see below). And of course we’ll be the only pub where you can buy Picalechilli… 🙂 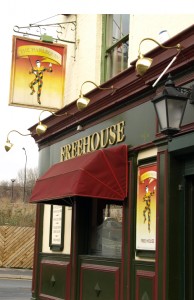 The Harlequin in Sheffield

Do you do accommodation?
Unfortunately not.

What is your perfect pub?
Apart from the Harlequin? 🙂 I love going to pubs in the afternoons, so it would be somewhere unfussy and comfortable with soft light, plenty of space to read a paper, decent music playing in the background, and excellent beers. A good gueuze/lambic selection would be nice too, please!

What challenges have you faced as a publican?
The landlady we’re taking over from has done a fantastic job with the pub and a lot of the regulars are very loyal to her – so we’ve got a lot of people to win over and convince that we won’t change the things that make it a great place!

Where do you think the future of local pubs lies?
It sounds cliched, but I think being aware of the community they’re part of is key. Picking an identity/focus and being true to what they do is very important as well – the worse thing for me is a pub that tries to pander to everyone’s needs, so what you end up with is something that’s very confused and doesn’t really suit anyone.

Any exciting plans for the future?
Linked to our plans for the food, I’m very excited about our planned ‘Produce for Pints’ scheme – we hope to involve keen gardeners and allotment owners in supplying fresh fruit and vegetables for the pub menu and pickles range. We’re also looking to increase the range of real ciders, and introduce good quality bottled beers (not just gueuze and lambics for the landlady’s secret supply!).

Predictably I’d also like to offer a bigger range of gins and rums. Lots of other plans too, but these are the ones we’ll be focussing on for now. Oh, just one more thing (as Columbo would say) – we’ll be continuing with our twice-yearly beer festivals (April & November) and also hopefully doing some other focussed beer events throughout the year too. We’re currently planning a Scottish beer festival for May in conjunction with The Devonshire Cat & The Universiy Arms, two other fantastic Sheffield pubs.

Would you recommend the job to someone else? if so what words of wisdom would you give them?
Be prepared for long hours, sleepless nights, and a head ready to explode with ideas! But the satisfaction that comes from caring for and serving a product that’s been crafted and looked after by small producers is worth it. And spend time talking to the people who ultimately make it work – your customers and the people who work there.

Does your pub have a website? facebook? twitter?
http://www.theharlequinpub.co.uk – it needs some work on the design, but the address will remain the same and we’ll be linking it with the blog (http://theharlequinpub.wordpress.com). We’re planning on using twitter a lot (http://twitter.com/harlequinpub) – facebook I hate, but we have set up a page. Maybe if some of our non-facebook hating staff fancy having a go with it we’ll develop that side of things too!

Anything else you want to tell us?
Support your local pubs and breweries! Please.

Thanks to Liz for being my guinea pig with this one, you can follow her on twitter @ginsoak.

If you are a publican or know a publican who wan’ts to take part then please let me know.