Posted on April 30, 2011 by andyMogg in Beer Reviews, Mikkeller, Open It 6 Comments

As part of the second Open It I’ve lined up a few beers I’ve been keeping for one reason or another, the first two I decided to open were Mikkeller 1000 IBU and the Mikkeller Barrel Aged 1000 IBU.

I’d been keeping these two to try side by side and to be honest I was a little worried about opening them, I’m a HUGE fan of Mikkeller and I had heard mixed things about both of the beers, not only that they weren’t cheap,I also think they were pretty limited edition, so didn’t want to be disappointed. 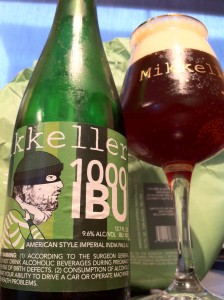 Wonderfully presented but a bugger to get into.

Mikkeller 1000 IBU Is described as an American Double IPA (DIPA or IIPA) that comes in at 9.6% ABV and according to Mikkeller the 1000 IBU relates to the theoretical IBU of the beer (you can read more about it here). Apparently he wanted to brew a beer with lots of bitterness that was ultimately well balanced and relatively easy to drink.

I seemed to make sense to start the non barrel aged version so I washed and dried my cool Mikkeller Teku Glass and carefully unwrapped the paper from the bottle, to be presented with a corked and caged champagne style bottle, It took a while to get the cork out but once I did I could really smell the sugar coming out of the bottle.

It poured a lot darker than I thought it would, really really dark brown with a huge foamy head, It smelled really sweet and bready, a bit like brioche coated in lemon and pineapple marmalade.

In the mouth it wasn’t quite as bitter as I expected, don’t get me wrong it was really bitter but not mouth puckeringly bitter.  There was a huge amount of brown sugar which reminded me a bit of the Southern Tier Cuvée I’d had not so long back. The sugar worked well with the citrus and pine from the hops. There was also a fair bit of date or raisin in there too, It was kind of hard to tell as the bitterness made it difficult to pick flavours out.

The carbonation was soft and creamy, which for me was the key to being able to drink it, if it had been too flat or too fizzy then it could have been a disaster. Overall I enjoyed 1000 IBU it wasn’t my favourite beer from Mikkeller.

After having a few glasses of water and some ice cream I decided to go for it and open the Barrel Aged version. A couple of people on twitter had pointed it that they thought it tasted like BBQ Sauce, which kind of reminded me of the 1st Open It where I had Rougue Chipotle Ale. 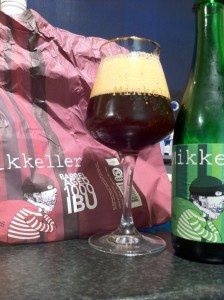 It came in the same style bottle wrapped in paper and with the same near impossible cork to get out of. I believe it was the same 1000 IBU that I had earlier but that had been aged in Islay Whisky barrels.

It poured a whole lot darker than the already dark 1000 IBU with a slightly darker but similar sized head.

The aromas were pretty similar but there was a defined smoked wood characteristic which was like people said, similar to BBQ sauce, It reminded me very much of those hickory chips you get to add a bit of extra flavour to your BBQ.

In the mouth it had the same creamy texture but was no where near as bitter or sweet as the non barrel aged version.  The big flavours were the smokey wood and whisky and it also had a lovely peaty quality to it, this Im a big fan of in beer and whisky.

The hops weren’t quite as prominent and the bitterness wasn’t quite as high,  which for me made it tastier than the other bottle and a whole lot more drinkable.

Barrel aging can usually make or break a beer, I’ve had some beer that really didn’t suit sitting in a barrel but this one from Mikkeller isn’t one of them. Yes the flavours may be slightly over the top for some people but on the whole I would pick Barrel aged 1000 IBU over the standard one every time.

For those of you who want to know a bit more about Mikkeller and their beers you can read my meet the brewerwith Mikkel  here, or read my thoughts on other Mikkeller Beers here