Posted on January 5, 2011 by andyMogg in Beer Reviews, Mikkeller 3 Comments

It’s become a bit of a Christmas tradition that on Christmas morning we pop round to my parents for bacon butties and a coffee based beer, last year I took Saints and Sinners Insomniac so 2010’s choice had a lot to live up to.

So when Beermerchants.com got their latest delivery of delights from Mikkeller I knew just which beer I wanted for Christmas morning, this was none other than Mikkeller Beer Geek Brunch Weasel. 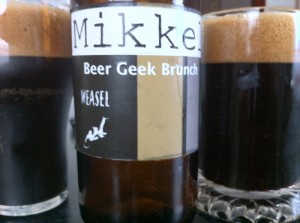 Deep, Dark, Delicious and one for sharing!

According to the Mikkeller website this imperial Oatmeal stout is brewed with one of the world’s most expensive coffees, made from droppings of weasel-like civet cats. The fussy Southeast Asian animals only eat the best and ripest coffee berries. Enzymes in their digestive system help to break down the bean. Workers collect the bean-containing droppings for Civet or Weasel Coffee. The exceedingly rare Civet Coffee has a strong taste and an even stronger aroma.

Sounds pretty special doesn’t it? I had a hard time not opening it the minute it arrived after reading that description. It also had a lot to live up to, not just because of the Insomniac last year but all of the other Beer Geek Beers I’ve had from Mikkeller have been outstanding.

So after what seemed like an eternity Christmas morning arrived, presents were opened and we sped off round to my parents for bacon butties.

Out came the Beer Geek Brunch Weasel, It poured almost jet black, there was a fair bit of sediment in the bottom which I decided to drink rather than waste, it was so thick and gloopy I couldn’t quite believe it.

The head was lively and an amazing coffee colour, not to dissimilar to the crema on an espresso. It smelled absolutely fantastic, quite dry with loads of roast coffee beans, hints of dark fruits and a little bit of booze.

The beer fills your mouth in a lovely thick velvety way, there’s bags of flavour to back up the aromas, these seemed more intense as the beer warmed up, which it did quickly as I couldn’t put the glass down.

There was a large amount of chocolate present, deep, dark and rich, followed by a sweet almost brown sugar then the coffee hits you like a shot of well pulled espresso then just a little bit of oats and alcohol on the finish that lingers until you take you next wonderful mouthful.

I was seriously impressed by this beer and my words can’t do it justice, this is a beer, that if you see, buy it, it’s not cheap but it is oh so worth it. Perfect for sharing, probably a wise idea at a smidgen under 11% ABV although I could have quite easily supped the whole bottle my self. Luckily my dad appreciated it too.