Posted on November 18, 2010 by andyMogg in Beer Reviews, Mikkeller 7 Comments

When Beermerchants announced they were getting a pallet load of Mikkeller beers I found my self rather excited (some would say too excited), I’d not had any beer from Mikkeller since visiting the Great British Beer Festival a few months back and he is one of my favourite if not my favourite brewer.

For those of you who aren’t familiar with Mikkeller, Mikkel doesn’t have a brewery so relies on being able to create and brew beers at other breweries as a result each one is different and he gets to experiment with some really crazy stuff. You can read more about him here when he did our Meet the Brewer feature. 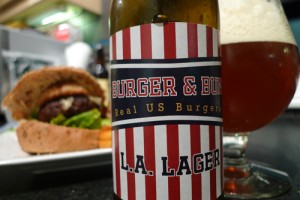 I’ll be honest I didn’t really know much about this beer apart from it was brewed for a burger bar to sell and it was going to be a lager style beer, and it was one of the cheaper bottles in my order. The bottle is really striking red and white stripes and despite my football allegiance being to the black and white stripes the empty bottle now resides on a shelf in the garage with all the other cool empties I keep.

The first thing that strikes you is just how light and well balanced the beer is, there’s sweet caramel malt and slightly bitter hops, the flavours from the nose are there, not in huge amounts but enough so you know that they are there, it’s very lager like just with some added hops, so Burger & Bun L.A. Lager sits below the big hitting American IPA’s but slightly above corkers like Adnams Spindrift, this makes it amazingly light and drinkable, it’s one of those beers that really should come in a huge 750ml bottle.

It was only right that I paired it with a burger and chips, after all that’s what it was brewed for. I made my own homemade spicy chilli burger with all the trimmings (recipe here) as expected it went perfectly with the beer, the malt sweetness and hop bitterness were a perfect foil for the spice in the burger, the big hitting beef beef, mature cheddar and the slight sweetness off the onion rings…..this really was a meal to savour, I only wish I’d had more of the beer to drink…..Next time I place a Mikkeller order I am buying 2 of each, although I might have to sell a kidney first.