I’ve recently gotten into Moor Beers in a big way, ever since having my first bottle of Somerland Gold and JJJ IPA towards the end of 2009 I’ve been wanting to try Moor of there beers (see what I did there??) So when I received a tip off that Beer Merchants was getting some in I saved some cash back for a mixed case. The case included 1 JJJ, 2 Somerland Gold, 2 Old Freddie Walker, 2 Peat Porters, 2 Merlin Magic, 2 Revival and 1 Fusion – a cider barrel aged version of Old Freddie Walker. 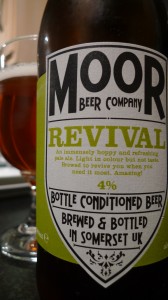 I couldn’t wait for them to arrive, so no sooner had they landed on my doorstep, I had cracked open the rather delicious Somerland Gold, It went down a treat. This left me wanting Moor, so I ended up cracking open a Revival.

Moor Revival is labeled as a Hoppy Pale Ale, so it sounded right up my street, It comes in the same 640ml bottle that the other Moor Beers come in, it also comes with the same lovely labels as the rest, each one a different colour and as I said before, I really do love their branding.

Revival pours a golden copper colour with a thin white head, the head lasted all the way down the glass despite it being so thin.

Revival smells really great, malty, hoppy, zingy lemon and heaps of citrus, with just a hint of sweetness coming through.

This is another of those beers that tastes exactly like it smells, the biggest flavour without doubt are the hops and the citrus that comes with them, these add a lovely bitterness that’s not overpowering and balances the biscuit and caramel sweetness that comes through from the malts. The hops don’t blow you away like some of the mega hopped US IPA’s but this is one of the most hoppy English beers I’ve ever had and really well balanced to boot. O

Did I mention it’s also one of the most flavour packed 4% beers I’ve drank too…?

So far out of the Moor Beers I’ve tried (reviews for the others coming soon) this is by far my favourite, the flavour is bang on and I could have quite easily supped the other bottle straight away, I restrained as I really want to share it. It’s not cheap at £3.80 a bottle but in my opinion it is well worth it. The empties also make great decorations ;o)

Check out their website @ www.moorbeer.co.uk – it’s been updated since my last review and has a bit more information.