Posted on October 4, 2009 by andyMogg in Beer Reviews, Breweries & Pubs, Hogs Back 1 Comment

Traditional English Ale or T.E.A for short, was a beer I had wanted to try for a while, so when I got my hands on a bottle in one of Hogs Back’s nice little gift sets, I was quite excited to try it, unfortunately i hadn’t had time to write up the review until now. 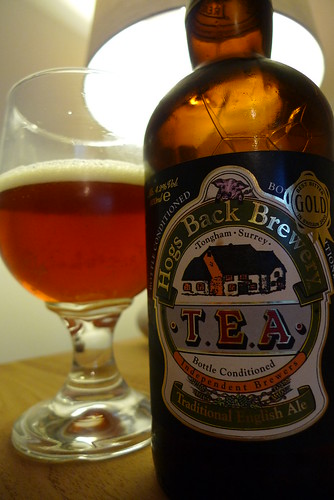 T.E.A is Hogs Back’s flagship ale and is a classic best bitter.

The branding and labelling is spot on, it’s quite traditonal but with a nice little quirky twist. The gold “CAMRA says his is real ale” capping and cap sleeve also adds to it’s shelf presence, making it stand out.

The beer poured a lovely dark rich amber colour, it was lovely and clear as i had poured it carefully leaving most of the sediment that is common with bottle conditioned ales, in the bottle.

The head was a lovely pale off white and a decent size too, the aromas were lovely, fruity, slightly bitter with a little bit of grass and hops.

The taste is quite dry and hoppy with a tiny little bit of sweet fruit and there was also a little bit of malt in there too. The finish is nice and dry and bitter leaving it’s lovely flavour in your mouth for just a few seconds after drinking.

I’ve heard a few people say they were disappointed with T.E.A as they were expecting something a bit more powerful and hoppy, which i find a little surprising really as there is a fairy whack of hop there, granted it doesn’t blow your socks off like an IPA but that’s not what it is all about.

This is (as the bottle says) almost what i personally would expect from a Traditional English ale, nothing to complex, nothing to over powering just a well balanced, well flavoured drinking ale, perfect for drinking all year round but especially on an autumnal night with a nice hot meal

Personally i would combine it with some good old English grub like bangers and mash, roast dinner or fish and chips (i think I had it with fish and chips)