It had been a while since I had Morrissey Fox‘s Blonde, mainly because I remember it being a bit a bit boring, but when I saw the Brunette I thought I’d give the Blonde another chance and do a side by side tasting.

For those of you who aren’t familiar with Morrissey Fox, they started off buying a pub and setting up a brewery which a TV crew followed them to document their experience, read their story here. As far as I know they now no longer run the pub but have kept the brewery going and are set to release some new beers soon. 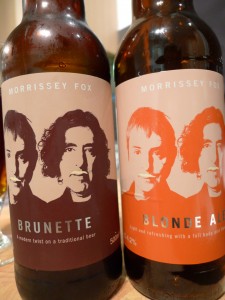 Do you preffer an blonde or a brunette?

I decided to start my tasting where Morrissey Fox started….with their Blonde Ale, It’s described as a hybrid between a lager and an ale and comes in at 4.2% ABV.

It pours a very light golden with a decent sized off white head, it looked quite fizzy and only had slight aromas of a little bit of malt and a little bit of hops. Which is almost exactly what my previous tasting notes said.

The taste was very similar, not really all that much there, easy enough to drink but just a bit bland and boring, It reminded me of why i wasn’t keen before, on the other hand it was right up my girlfriends street, she found it refreshing and light and said it was rather delicious, so loving her as much as I do, I let her finish the rest of the bottle.

While she finished off the Blonde, I couldn’t really sit without a beer so I cracked open the Brunette. The Brunette is slightly weaker at 4.0% ABV but is more of a traditional bitter.

As expected it pours a lot darker than the Blonde, it actually smells of a lot more too, sweet toffee malt and hints of fruit. The first sip really surprised me it, it blew the Blonde out of the water. It was medium bodied with a lovely bitter earthy taste which was followed by the sweet malt that was present in the aromas. The flavours didn’t last long but they were pretty good. Surprisingly Emily also loved this beer, she only got a glass of it though, after all she had supped nearly all of the Blonde.

As it stands I would’t buy Blonde again but I would most certainly buy the brunette again, it’s a classic example of a nice simple drinkable beer.

It’s avaible from Tesco and it costs just over a quid so it’s worth trying if you are in there.