Posted on November 21, 2011 by andyMogg in Beer Stuff 6 Comments

Pork Scratchings have to be one of the best British beery bar snacks out there, crunch and salty they go with pretty much any beer you can lay your hands on.

Unfortunately it would seem that the majority of packets of scratchings use rind from Danish Pigs, this travesty has lead Tom Parker Bowles and Matthew Fort into creating what they are calling a revolutionary new pork crackling product. 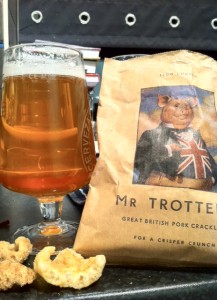 Mr Trotters uses 100% British pork rind which is slow cooked in small batches to give the crackling a lovely solid crunch, without making them rock hard. They also contain no MSG and they are seasoned with sea salt and a special seasoning to give them an extra punch.

As you’d expect they aren’t the healthiest snack on the planet so it’s a good idea to share the bag, which I have to say is very nicely designed, much better than the majority of horrible plastic bags you get scratchings in.

The crackling its self has a nice flavour, not to salty, they were nice and crunchy, not quite as crunchy as some but at least there’s little chance of breaking your teeth on them. There was a good mix of big chunky bits and smaller thinner bits of rind. They seem to be a bit of a halfway house between those traditional butchers style scratchings which are really hard and have little bits of hair on and those pork crunches you get which are more like crisps thank crackling.

I’d paired them with the awesome NZ Pale from Hawkshead Brewery and the salt cut through the hops quite well, wasn’t sure if it would work but it did  and very well.

They should be available in shops, bars and selfridges now and retail at around £1.89 per pack which is a little more than most scratchings but they work a little bit better as a sharing bag.

Mr Trotters Crackling is well worth a try if you see them or if you’re not keen on the super hard ones that most pubs and bars stock.