For those of you who haven’t heard of it (or looked at our places to buy beer page) My brewery tap is an online beer shop that sells beer directly from breweries, so when you place an order your beer comes straight from the people that made it, this in theory gives you access to many different microbreweries that you might not otherwise have access to.

The thing that grabbed me though was their 52 week beer club, the concept is nothing new or ground breaking but I think this has the potential to be the best of the bunch, Unlike most of the existing beer clubs My Brewery Tap select beers from certain microbreweries and send them direct to your door every quarter, so you end up with 52 different beers from around the country. So what you should end up with is lots of new and different beers that you haven’t tried, where as some of the other beer clubs send out beers that are readily available in your local supermarket.

My first delivery arrived a couple of weeks ago and I haven’t had chance to write about it until now, It contained 13 beers, most of which I have never even heard of and a couple from places I’ve heard of and wanted to try, The beers i got were:

There was also a free glass and bottle opener along with comprehensive tasting notes and a little brewery guide book which was great! 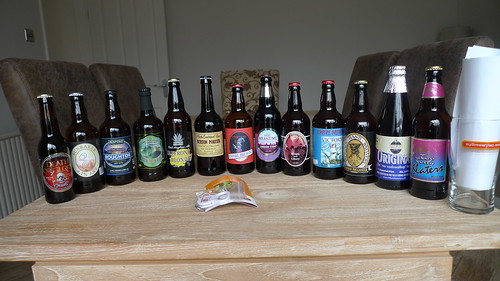 So is it something that i would recommend – hell yeah, provided they stick to microbreweries and the beers are great quality then they are on to a winner, I’ve already subscribed (twice..one for me and one for someone as a gift – hopefully they won’t read this, if they do, no you can’t have them early!) at the current price of £69 for the 52 bottles i think its a pretty competitive price and would make a great Christmas gift for the real ale lover in your life.