Posted on January 11, 2010 by andyMogg in Beer News, Beer Stuff No Comments

I know this is a little bit late and it run’s into new year’s day, but it would have been wrong of me not to include those drinks that I drank after Midnight.

It shows that when I drank I usually drank over the recomended daily allowance, this was mainly down to the strength of the beer, drinking higher % ABV beer soon consumes the units and it’s that time of year where I am into strong dark beers with the odd pale ale thrown in for good measure.

As you would expect the units consumed was higher than the past 3 weeks and peaked on new year’s eve but at no point over the festive period was I drunk, possibly a little merry but never drunk. The new years eve drinks were spread over a 9 hour period and involved a mix of beers and the occasional spirit, they were also accompanied by a rather brisk walk and a 3 course meal. So over the 31 day period I was apparently just over 2 units per day over the recommended amount …read into that what you will. 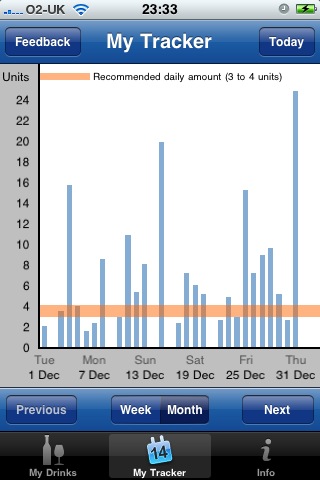 My Intake for December 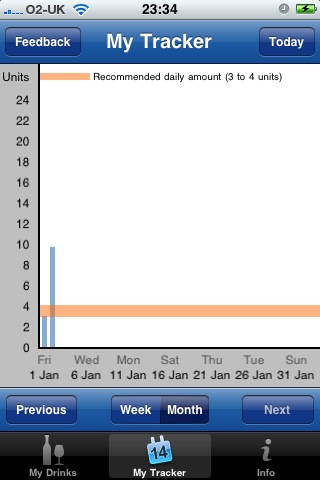 It’s been an interesting experiment logging what I’ve drank and it is something, for the time being that I am going to continue and I might keep posting my progress on here.