Over the last few weeks I have made a couple of posts about my drinking habits (one here and one here), well yesterday was the end of my first week of tracking my alcohol intake using the NHS Iphone app. As you can see below I didn’t do too badly. 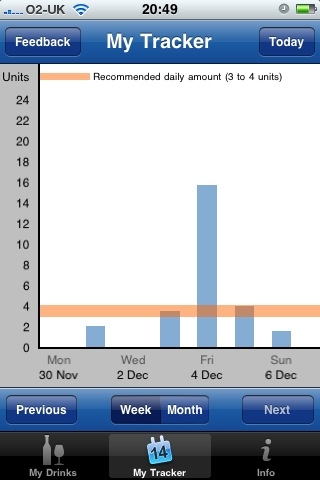 As you can see Friday’s intake was huge compared to the other days which would suggest I drank lots of beer, but the truth is I only had 4 bottles that day – 2 bottles of Thornbridge Halcyon, 1 bottle of Okells IPA and one bottle of Shepherds Neame 1698,  the problem with this was that they weighed in at 7.7%, 4.5% and 6.5% respectively. This meant that just one bottle of Halcyon meant I was close to the recommended daily allowance and 2 bottles made me a binge drinker.

If you look at the other days these were days where I only had one bottle, but again a couple of them were rather strong so put me close to the red line again, so I dread to think what would happen if you had a good session on the ale or went out drinking spirits, I have a feeling the graph would look quite scary.

The app overall seems pretty good although it does limit the way you can enter the drinks you have had, for example the beer strength only goes up to 9% and there are some rather common drink serving sizes missing such as the 500ml bottle. This means that you have to put a 500ml bottle, the same goes if you have a 6.3% beer you have to put it in as 6.5%, it wouldn’t take much for the developers to remedy this but I can’t help think the NHS’ money would be better spent else where.

Judging by the comments on the Itunes store, some people have come across the same problem with other drinks others seem to think its a game to see if you can drink more than your mate or drink more than the day before, so no doubt someone will point this out to the NHS at some point and they will get a bit of a ticking off through no fault of their own.

One comment on “My Drinking Habits – NHS Tracker Week 1 Update”