Posted on February 8, 2012 by andyMogg in Beer Stuff, Food and Recipes 5 Comments 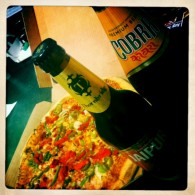 A couple of days ago a bottle of Cobra and a bottle of Thornbridge Jaipur arrived in the post and went straight in the fridge and then last night a freshly baked Dominos Tandoori Hot pizza arrived just before 19:00.

The pizza was swiftly shared and consumed with the beers, spot on it was too, the pizza was Domino’s crispy thin base, covered in tandoori chicken, onions, green pepper and of course Jalapeño chillis. The Jalapeño’s gave it a nice tingle on the lips and tandoori chicken was surprisingly well spiced and rather tasty.

The huge bottle of Cobra went really well with the curry spice in the chicken and it’s no surprise its one of the most popular beer for with a curry. It’s crisp, smooth and really simple, best served really cold, the warmer it gets the more the sweetness comes through which really spoils it. I know a lot of people don’t like Cobra because it comes from those big evil giants that are Molson Coors but I’m not one of them, they have it on tap in my local curry house and its great.

Jaipur was one of my favourite beers ever and it’s been mentioned on the blog numerous times for me it was one of the best beers in the country for a long time, unfortunately it seemed to have gone off the boil and the last few bottles and pints in the pub I’ve had have been far from great, this bottle was a little better than those but still seemed to be lacking the hop punch, tropical fruits and freshly cut grass that was always present in the earlier versions. It was still a decent enough beer and like the Cobra coped well with the flavours of the pizza. I’ll keep trying Jaipur when ever I can in the hope that one day it’s back to it’s former glory.

If I’m honest I’m pretty sure that any of the beers that Beer Genie suggested would have worked well with the pizza. There wasn’t enough heat in the pizza to obliterate the flavours in the beers so even something light like the excellent Korev would have worked a treat as that was one of my favourite beers of last year.

It’s a nice idea from Beer Genie teaming up with 2 high profile sponsors in Domino’s and the Saracens Rugby Team, I’m certainly all for getting more people to try different beers with their pizza and thinking about how the flavours compliment each other.

You can download the beer and pizza pairings as a PDF here and check out the Beer Genie website here for loads more beery info or order your self a pizza from Domino’s here.