Unsure what to do during the day on new year’s eve and with the other half at work myself and Dave managed to swing some cheap train tickets to York so I decided to dig out the map I made for 2009’s trip with Mark from Real Ale Reviews add a couple of new pubs and go from there, you can see the new map here. 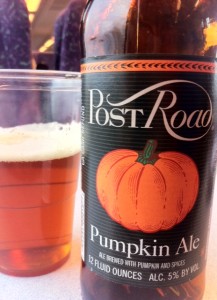 Great flavour shame about the fizz.

The train was surprisingly quiet so we managed to get a seat with table before cracking open a couple of beers for the journey, the first was a bottle of Mikkeller Jackie Brown, a cracking hoppy brown ale, although possibly a little bit too strong for the time of morning but what the heck, might as well start the day with a bang.

Next up was a bottle of Post Road Pumpkin Ale, one I’d not seen before but Dave brought along for the ride, it was delicious, it was packed full of Christmas spice, clove, nutmeg and a hint of cinnamon, my only criticism was it was way to fizzy which took the edge off an otherwise excellent beer. Both beers were accompanied by a snack of rather yummy chilli chocolate coffee beans that Dave had also brought with him.

We arrived in York at bang on 12:00 and headed to our first port of call, the wonderful Maltings pub, It’s got a great range of beer and a great interior with loads of character, a must visit on any trip to York. As with most trips to the Maltings I started with a glass of Roosters Yankee, It’s almost the perfect session beer, light, refreshing, nicely balanced and mega drinkable.

This was followed by Black Sheep’s new porter…Wooly Jumper (4%) a first from the Yorkshire brewers, it looked fantastic in the glass, really really dark with a lovely tan head. It had a really lovely smokey character to it with a bit of wood and a tiny bit of sweetness, definitely one to watch if they decide to keep making and tweaking it.

After this and concious of only having a few hours we headed to Pivni, unfortunately they were having a few issues with so they had to delay their opening, forcing us into changing our plan and heading for the Last Drop Inn, one of the York Brewery Tap pubs, Now while it served the York beers there was a beer on the bar that I just couldn’t resist. Hop Back Winter Lightning, I’m a big fan of their Summer Lightning, which they also had on the bard and Dave opted for. Much to my surprise Winter Lightning poured the same as the Summer Lightning but smelled and tasted completely different, It was packed full of ginger, cinnamon and nutmeg with a little bit of yeast and some hops in the finish…simply gorgeous, the perfect beer for sitting next to a nice open fire after a long walk in the snow…none of that in York though and it was time to head for the next pub. 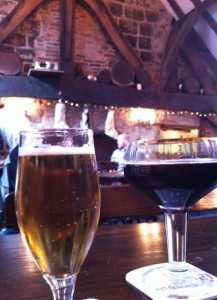 Just round the corner was the House of Trembling madness, a cracking little bar that is one of York’s best kept secrets, it sits above one of the best bottle shops in the North, funnily enough called The Bottle. Its got a huge high beamed ceiling, massive fire place and great old inn tables and chairs, it’s like stepping back in time. We quickly ordered a glass of Jever and a glass of Barbar Honey beer, the Jever was as crisp and refreshing as always the Barbar was a a great surprise, dark and fruity, malty and slightly sweet, honey was definitely present but not over the top like some beers in this style.

By now we were getting rather hungry and after watching a few plates of food from behind the tiny, but well stocked bar pass by we decided to dive in and try a Hunters platter each, A huge wooden board full of meaty treats all form Yorkshire, such as wild boar, smoked duck, smoked chicken and parma ham, served with home made bread, mustard and a deliciously crisp salad, all of which was surprisingly filling, this was accompanied by a glass of Tripel Karmeliet, which was amazing, spicy, slightly sweet, stupidly easy to drink for it’s ABV.

Just as we were finishing our drinks we heard through twitter that Pivni was back open so after a quick root round the bottle shop we headed off to sample their wares, not before buying a few bottles for the journey home though.

Arriving at Pivni we were greeted with an amazing array of kegged and cask beers, but there was only one to start with, the much sought after Thornbridge and Darkstar collaboration beer, Thornstar. It poured a lovely dark brown colour with a really thick and creamy white head almost like a Guinness. It’s a great beer, it plays with your head, it’s so dark yet the flavours are so grassy and piney from the hops it kind of takes you by surprise, It also has plenty of caramel and almost nutty 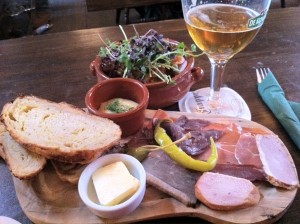 malt, it is superbly creamy, a perfect example of handpulled ale. If I was nit picking then I would say it is a little bit confused but I would certainly drink it again.

Next up was MatuÅ¡ka Raptor IPA which hails from the Czech Republic of all places, not somewhere you would usually associate with the area but a sign of their latest craft beer revolution. It was a great example of a well balanced, hop busting IPA, loads of biscuity malt and a tasty bitter hop finish…excellent stuff.

Next up, I’m not entirely sure what it was, the pump clip said Meantime special but I’m sure someone said it was their London Lager, to be honest it wasn’t great, I didn’t make many notes on it and the comment that accompanied my twitter pic simply said hmmmmm, so I will leave it at that.

The plan was then to head to the Evil eye lounge for a last beer before heading for the train but we decided we fancied cheese and Belgian beer, so having seen the cheese platters back in The House of Trembling Madness we headed back there. Not fancying the potato salad, as yummy as it looked and smelled we just wanted the cheese. The dairy goodness came on the same sort of platter as the meat we had earlier, with 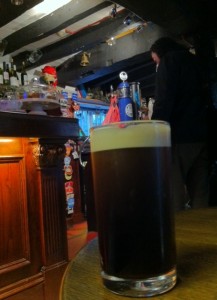 similar home made bread, some lovely sticky chutney and some huge lumps of cheese, the Yorkshire blue being the pick of the bunch. This was teamed up with a La Trappe Dubbel, It was an amazing deep red colour, really rich, sweet aromas with a really fruity taste, plums, dates, prunes, those sorts of fruits, just a little bit of spice and a touch of alcohol added to a great finishing beer.

We headed for the train, after buying a few more bottles from the shop below, who’s ever idea that was is a genius, I also picked up some smoked chicken breast and peach beer as a present for our lass, yeah that’s how I roll.

On the train it was time to crack out a couple of beers, one which had come all the way from the USA via Mark from Pencil and spoon, It was crazy, it had no less than 5 different chillis in it, it wasn’t hot or spicy but was packed full of green chilli, it was quite sweet, a really interesting concept which was great to try, so thanks Mark.

Last beer of the day fell to the awesome Orkney Porter, one of my favourite porters from the last few months, jet black, smokey and I can’t believe this is the first time I’ve written about it, I’ve certainly drank enough of the stuff.

I had a great day, great beer, tasty food, lovely atmosphere, friendly and knowledgeable staff and great company!! I can’t wait for my next visit, there are so many other pubs I want to try as we didn’t even touch on a big chunk of them.