Posted on May 13, 2011 by andyMogg in Beer Reviews, Breweries & Pubs, Captain Cook 3 Comments

After a long day at work I took a detour on the way home, a detour to the White Swan in Stokesley, home of the Captain Cook Brewery, The brewery is going from strength to strength and has improved immensely over the last few months.

The reason for me detour was mainly to try their new 7% 70IBU beer, aptly named 1770.  I was driving so couldn’t have much. 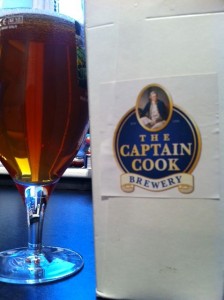 Slightly darker and less head than in the pub

The pub was pretty busy, the locals were certainly enjoying the beer, I was greeted by the lovely Ashma was very welcoming and, as always had a smile on her face. She pulled me a half of the 1770, it looked fantastic, a fair bit lighter than I imagined it but a lovely pale caramel colour with a fantastic head. I couldn’t be bothered to let it settle so I dived straight in.

It smelled of caramel waffles, slightly spicy and slightly hoppy. In the mouth it was really creamy, there was a lovely well balanced bready sweetness to it, there’s bags of vanilla which is followed by a slightly sharp bitterness which lingered and the left me wanting more, the half disappeared in no time at all. The 7% ABV certainly shows it’s self with a warming boozy feeling after just a half.

I was just about to order a 2 pint take away of the 1770 when a half of their other new beer appeared in front of me (thanks Matt!). Nee Batts is described as a 3.9% hoppy pale session ale, and it was just that. The head was spilling over the glass, it was light and grassy with a hint of citrus and even more moorish than the 1770…..No wonder the locals were knocking it back like there was no tomorrow. It was now time for me to leave, so I bought my takeaway pints and set off home.

So as I type I’m sat supping 1770 from my new Badger Ales glass (sorry Matt, but its like the Captain Cook ones, just bigger ;op ) It travelled home surprisingly well, it obviously doesn’t have the head that pub version has but that’s to be expected.

I’m about halfway through the milk style container and I can’t put it down, the sweetness with the slightly sharp bitterness I mentioned earlier is fantastic, it leaves the vanilla in your mouth for ages and intensifies the more you drink it, almost like sucking a vanilla pod. The alcohol is coming through now more too, if I had one criticism it might be that this could be toned down a little bit.

I have no idea if this is what the guys were after but I love it, I really hope it makes it into the permanent range, I’ve got a feeling that in a bottle this would really go far!!

And that’s it from me, I’m off to drink the rest of it now I may well regret it later on…

PS if any publicans are reading this, do your clients a favour and get some of these take away cartons, they are fantastic, all pubs should do some sort of take away cask container….