Posted on May 6, 2011 by andyMogg in Beer Reviews, Breweries & Pubs, Odell Brewing 6 Comments

Doug Odell is something of a legend in the brewing world you rarely talk to someone who loves their craft beer/hoppy beer/American beer (delete as appropriate) who doesn’t mention Odell Brewing.  Unfortunately until recently I hadn’t had chance to try any of his beers, until this arrived in the post and I then found Colorado red, the collaboration brew that Odell did with Thornbridge while I was in London. 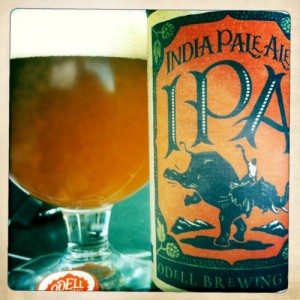 Odell India Pale Ale (IPA) is Odell’s take on the traditional IPA shipped from England to India in the 1700’s. It weighs in at 7% ABV and 60 IBU’s.

It’s won a whole trophy cabinet of awards back in its home country and I can see why.

In the mouth its got lovely fresh bread undertones with a delicious orange bite then a Herby resinous flavour from the hops, it’s  beautifully balanced with  just enough bitterness to give it kick at the end before it mellows out, it also hides the ABV very, very, very well.

I love the Odell branding, right from the bottle caps to the website, lots of thought and detail has gone into every aspect, The bottle tops have the Odell Logo in different colours, the seasonal’s say they are seasonal’s, The labels look and feel lovely and the website has some brilliant touches. In fact a lot of breweries on both sides of the pond could learn a lot from Doug Odell and his team.